Ravi Dubey, a popular television actor has made it big with the TV serial Jamai Raja. An actor par excellence, he has portrayed 18 different characters in the serial which has got good TRP. He is married to Sargun Mehta, also a television actress, whom he proposed to in the final episode of Nach Baliye 5. A devoted husband, he presented his wife with the splendid Jaguar XF on her birthday back in September 2014. The old age British Automotive brand, Jaguar is a quintessential of one of the finest and uncompromised extravagance and comfort on offer along with fulfilling the innate desire to own a supreme luxury vehicle, which stands apart. source - indianautosblog
Now one for the instant recalling.......

The alluring signage of the ‘leaping cat’ on the bonnet (ahh! remember the colossal XJL) brings with it an oomph factor and depicts the company’s core values of power, performance, elegance and the sheer ambition to bring about a revolution and climb the ladder of success undeterred.

Ok, you'll be taken in by the coat of arms up there on the front too!!!

Every model from the British stable of Jaguar carries a unique and distinctive charm that is reflective of the owner’s personality and for Ravi Dubey, owning the ever gorgeous XF is proof enough of his admiration and head over heels in love for Jaguar. 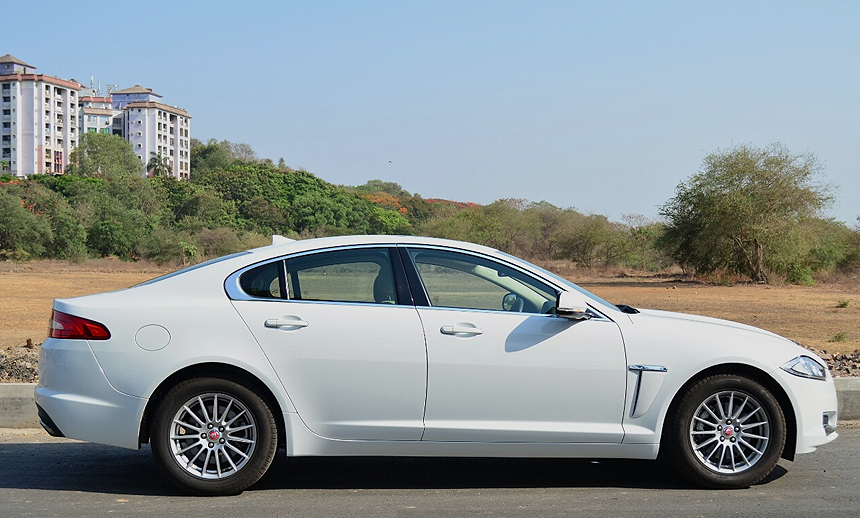 Possessing the Jaguar XF been a dream come true for the actor and this is just the beginning of yet another eventful ownership experience with the British beauty.

Originally available with the S version housing a humongous 3Litre V6 engine that develops a colossal 275bhp on tap, Jaguar introduced the new 2.2 diesel variant so as to open doors to more potential buyers and make the car feel as special and opulent as its bigger variant .

Providing a tough market competition to the German Car Manufacturers was also one of the sole reasons for this introduction. It does look different from the 3Litre variant, but has the same charm and sophistication that is exuded well from all its exterior angles.

The mesh radiator grille with the classy Jaguar logo inscribed on it looks absolutely enticing. The boomerang arc shaped LED daytime driving lights together with the circular shaped dotted indicator lights are the highlight of the show upfront.

The chrome lined bars on either side contribute for the desired glaring specimen and on the whole a fierce menacing looking car takes you by surprise when you happen to get a glimpse of it in your rearview mirror. The side profile easily qualifies to be in a different league compared to the competitors, courtesy the majestic oncoming and the grand silhouette. The new wheel option make the XF look a bit toned down but that’s not a bad thing as it still gets second looks when cruising down a busy street.

The rear spots two major differences, they being the absence of the ‘S’ moniker which is inscribed on the 3litre variant along with the presence of a single exhaust pipe in place of the dual ones on the XF S . The curvaceous magnetic shaped LED braking lights are joined by a chrome fender lining, above which sits the Jaguar logo.

How’s the Brit on the Inside? The thrilling setup perfectly conveys Jaguar’s legacy and heritage to craft out the best interiors of all time. On entering the cabin, when one presses the start button, the Jaguar Drive Selector rises up meticulously and the A/C vents rotate in a faultless manner. What an incredible maneuver! The exquisite attention to detail is evident as one can touch and feel the rich quality materials used on the dashboard and on the well contoured seats.

The central screen comes with a host of goodies in the form of navigation, TV tuner and a rear view camera!!!

On a whole, a no nonsensical cabin that portrays nuances of both practicality and comfort at the end of the day is the real deal breaker. The new age 2.2 diesel engine comes across as one of the most eager performer when compared to the Germans. Although it doesn’t possess the nerve wrecking acceleration figures of the bigger XF S, but is enough to put a big smile on your face with its thrust on tap. The motor is mated to an all new eight speed gearbox and develops 190 bhp along with 450 Nm of torque and does a 0-100 timing in a modest 8.5 seconds with a top speed of 225 km/hr.The XF gathers pace rather well and when the turbo kicks in, it completely changes it character and unearths the real potential of the car.

A void is surely felt in performance if one has had a tryst with the bigger sibling, but the transmission makes up for the gaps well and plays a catalytic role in enhancing one’s driving experience. The XF does not hesitate to be pushed around corners and meets your expectations rather well on this front. The ride quality is more comfy and pliant compared to the S variant since this car uses the 17 inch alloys. Undulations and rough patches are well taken care of together with causing little discomfort to the passengers inside the cabin. The steering is predictable at high speeds along and playing the satiating bit is the excellent braking performance to boast about.

These outstanding features truly make the XF pick of the lot having a blend of sportiness and luxury. The Jamai Raja has surely stuck a chord with the mothers in law, just like his Jaguar has done so with the car enthusiasts. We do hope to see Ravi Dubey in more entertaining television serials and add more cars in his possession.