Its Unbelievable How These Supercar Ads Have Been Made!

Revving engine, throttling sound, gasping speed are the terminologies that define the adrenaline rush of a petrolhead. And which is the better place to witness all this madness under a single roof than a car commercial. Many of us have been spell-bound by the grandiose sets and fierce supercars doing breath-taking stunts in an advertisement but are all these real? Of course not! It can’t be, as most of the time real is not sexy enough, may not sound convincing, can be too expensive, involves risk or too difficult to shoot.

The idea behind any advertisement is to manipulate people’s mind and develop a feeling of longing but in many cases, photographers play on both side of the lens. Felix Hernandez, a photographer by profession, is the best example in this case. But before moving further, let’s watch this popular Audi R8 commercial that is doing rounds in the market:

Chilling! Isn’t it? And the manner in which Audi R8 made its way is simply spine-tingling. But do you know that many of these cars in such commercials are not a real but toy cars? Yes, recently, Audi hired Hernandez for a $160,000 worth supercar photoshoot but it didn’t provide any real car to the photographer for the shoot. Or it’s better to say that Hernandez actually didn’t need any. All he required was a detailed $40 toy car and some flour to do the magic! Also, some plaster of Paris to create the effect of waves: 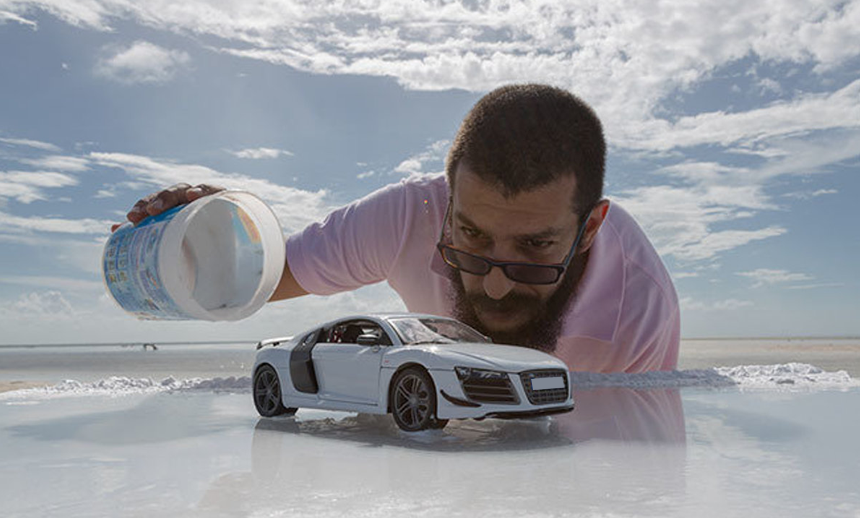 Another miniature wonder by Hernandez is the LOVE CAR. Take a look: 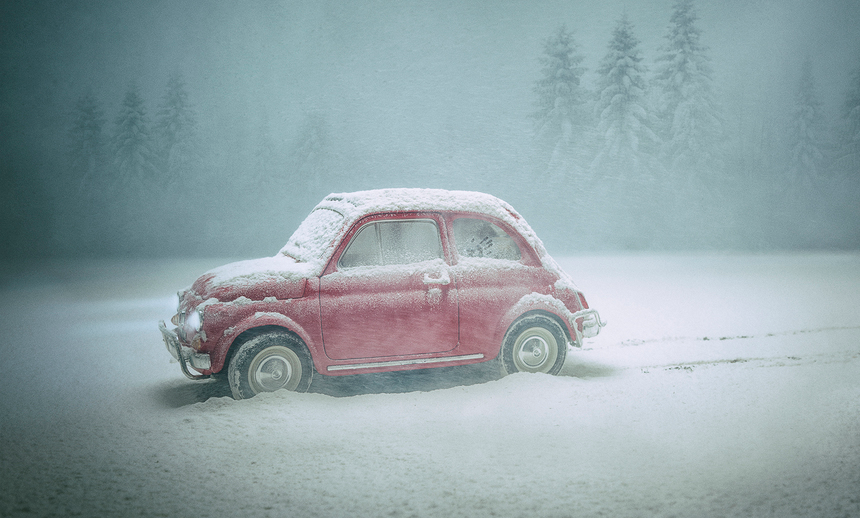 This astounding red beauty in the midst of snowfall can steal anybody’s heart but again it’s not a real car, but a toy. In fact, the snow-covered pine trees, the handprint on one of the windows, the tyre impressions on the snow, the dust, the headlight and the mesmerizing background too aren’t real. Check this out!

The best thing about Hernandez is that he never gives ‘photoshop’ effects to his pieces but uses props, miniature models, in-camera effects and lighting to give a realistic touch to each of his masterpiece.

Here’s another example of manipulation with viewer’s mind.

In this thrilling ad, the car used was real but not the surroundings. The Italian beast with 700HP is seen rampaged in and around the tough terrains and climatic conditions, but in reality, the situation is something very different and not unusual. Have a look at behind the scenes of Lamborghini Aventador ad:

Now you can pretty well imagine, it’s not Lamborghini but the creative head of the videographer who gave the commercial a magnificent touch.

Another example to be considered: Doesn’t it remind you of the golden era – the old times? The red Bentley looks stunning with every finest detail minutely visible. One look is enough to take your heart away! Now let’s reveal the truth behind this spectacular shoot. The Bentley is basically a toy car and the garage is a cardboard box. Have a look: Another commercial that has made it to the list is the 2016 Audi TT advertisement titled, “Audi TT: Reality? Check.” The ad has been shot using the tilt-shift photography style to provide a surreal effect to it. Where the boy is seen busy playing with its toy-sized Audi TT, the real one is seen performing brilliantly well in a surreal and vivid environment. But the irony is – the Audi TT showed stunt-driving in ‘real world’ is actually a toy car again, which if observed minutely, can be noticed. Here is the video: