Catapulting a showy hooked disposition for the unalike denominated singulars was in line to altering the “Cognizant gasping abilities” for an unsullied learning.

Describing it as a sudden developed infatuation coupled with the deep enquiring through stages for researching reproduces the equivalent fostering & upholding once possessed!

Bringing back something from the days of yore (ah! not that old though)?

Etching a formally like urbane German conduct to make you the streetwise bearer along with possessing multitude doses of prompt lingering….wait a sec, which is this one… Looks and feels Deutsche!!!
Announcing…… Welcome the dreaded contestant (Hahaha!) in the cut throat battle of flagships.
Save the date for future for a quick familiarizing with the Phaeton from Volkswagen….
Thinking of changing ends?
Let us first get to the divergent treatment…..

Biggie kind of a thing! The Phaeton draws a beforehand phantasm of being viewed as the leviathan VW ready to tackle the hard-bitten challenges put across.
Certainly, the Dreseden built illustration appears as a titivated old school wine which makes you yank towards its gargantuan genteel architecture. Maintaining with the knocked over look on seeing a German in your outside rearview mirror, this Volkswagen can very well keep that expression elongated which can have a spilling over to the other contenders as a gracious giving.
Cheers!!!

Stuffed with the gratifying ideals 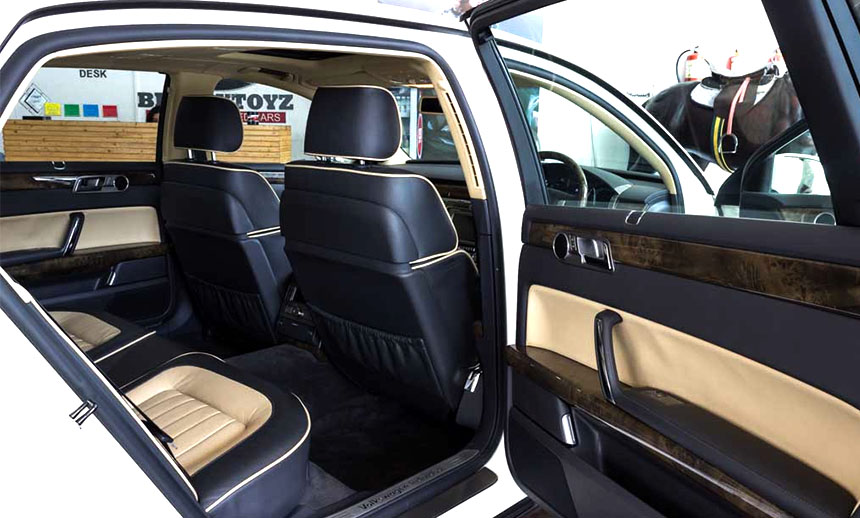 Presenting the elite white collared an empyreal seeming to ape their individualistic shadow as a worthwhile introduction.
Truly the Phaeton’s a laudable candidate when it comes to the scintillating movers and shakers emanated from the enterprising cabin. Grooving over the handmade terminology, the dreamboat rendezvous extends the worthy admirable actions too. The multi colored 8 inch touch screen will be among the initial paragons to keep you on a technological hilt.
Making an addition to the choicest picker’s fetching is the beautifully inscribed analog clock that seeks to propagate the long lived retro styling cues. The mulled state of having been overwhelmed by the multi zone climatronic and the trumping rear seat experience is proof worthy of Volkswagen’s unconventional codifications directed towards the opulent treatment. Be wary of Phaeton’s on the charge coming to uncover the hush-hush gung ho prevailing within.

Upfront, it won’t exude the paramount ringleader type attributes but letting a freeway to the herculean 3.6 FSI V6 petrol motor under the hood, the resultant list of tarmac toppers will automatically see a startling change of course.
Only a slight rushing needed to remove the longshot hanging around.

The VW flagship’s a raring kid at heart.
Reckon its brilliant and unfading bearing towards the enthusiastic “call of duties” undertaken with valiant convictions.
Don’t bypass the role of the chief six speed tiptronic gearbox doing a great deal to your jaunts and also the handy four wheel drive serving as a prime on the move custodian

Title of a wave maker Emphatically yes!|
The Volkswagen with its umpteen and brimming X factors get you the big hearty last laugh in the end. Heading again to stage 1 to reevaluate the sizable decision?
Surely not…..
The Phaeton doesn’t give any reasons to quibble and nibble!!!