Sonu Nigam, the versatile and evergreen playback singer and music composer is undoubtedly the best we have in the film industry today. His soulful heart-wrenching 'sandese aate hai' to the melodious 'kal ho na ho' touched a million hearts and made him a nation- wide phenomenon. His oeuvre consists of music compositions, albums and songs in almost all Indian languages. An accomplished and successful singer like him would definitely need a multifunctional car to suit his personality and needs, and what better than a Range Rover Vogue for our talented artist. The old age British car manufacturer Range Rover strives to create a purposeful statement when one thinks and fantasizes about SUVs.

One of the most revered and honored English automotive brand that has a famed legacy to churn out the most time tested vehicles from its stable.

It has struck a beautiful chord with its discerning customers, who as a result of an eventful ownership experience, become repeat buyers and brand patrons, which adds brownie points in the company's arsenal.

The reliability and dependability tag has paid off well indeed for Range Rover and gives it a unique and distinct identity compared to the competition. Being in a separate league of its own lends it that supremacy and hence it finds a special place in the exotic garages of our ever popular Bollywood Superstars, particularly of Sonu Nigam. The playback singer was head over heels in love with the classic Vogue and this was a prelude to the superstar's dream of owning one. The Vogue, on first impressions appears intimidating courtesy it's humongous and colossal dimensions. The wide face upfront catches one's eye with the blue chip influential radiator grille along with the majestic circular pattern for the "can't miss it" lights.

The lengthy bonnet and the renowned RANGE ROVER inscription accentuate the front appeal considerably and the overall facial appearance is a perfect culmination of retro modern design theme that gives a sophisticated and elegant stance apart from being a trailblazer for future Range Rover model's design themes. The side view too continues to intrigue with the typical boxy looks and chiseled appearance , which is again a trademark symbol of a Range Rover vehicle. The big sized wheels complement the gigantic length to a great extent and add that extra bit of sportiness and excitement. The charming rear end characterized by straight edges and simplistic styling cues manages to be a sheer showstopper and a crowd puller. The neatly sculpted circle shaped braking lights and the meticulous placement of the spare wheel underneath at the rear end, are the real talking points for a SUV of this class and stature.

One of the Best Cabins of all time The Vogue spells opulence and lavishness with its high quality interior setup that engulfs the passengers in sheer comfort and luxury.

The texture of the materials used on the control panel and seats remind one instantly of the exemplary workmanship of the British engineers that leaves no stone unturned with regard to an exceptional cabin ambience and experience on the move. The dashboard's appearance looks enticing and a person will be surely attracted to try out the flurry of buttons and knobs which are arranged with extreme attention to detail.

The touch screen is one of the benchmark setters with its intuitive functioning and crystal clear display. It lets out the facile and glib vibes as an erudation for the blue blooded clan.

The heated leather steering with multifunctional controls grips perfectly in your hands and first timers wouldn't complain much of its reach and height as the ergonomic issues have been well taken care of. The rising gear knob inspired from Jaguar truly thrills on starting the engine and simply elevates your excitement levels. The rear entertainment system garners attention with its wised up proceedings of all time...... The system much on the lines of its front counterpart enjoys the status of breaking the ice quickly and enables the rear passengers to be the first rate stalwarts when it comes to sampling with the English specimens on board.

The entire mechanism is smooth sailing and does not entail repetitive orientations, which is a boon for long and relaxing journeys.

A stealth Performer at heart 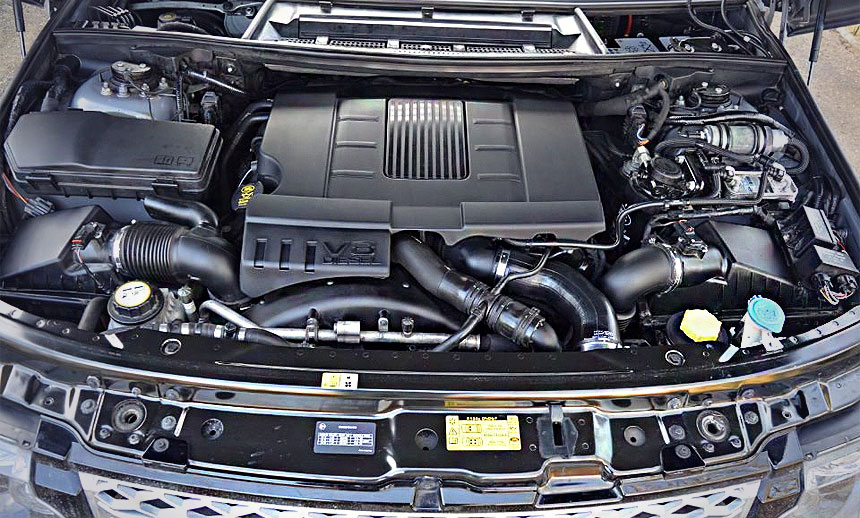 A monstrous 4.4litre V8 diesel motor with 313bhp and 700Nm of torque mated to an eight speed automatic ZF transmission, takes centre stage with its blistering and mighty performance. It possesses that inherent capability to get this mammoth moving with utmost ease and of course allows for those fascinating high speed encounters.

A 0-100kmph timing of 7.8 seconds is a strong portrayal of its brisk and stupendous acceleration along with satiating the enthusiast's desires for those exciting thrilling rides.

The eight speed gearbox does its job seamlessly with precise shifting and more joy can be extracted when it is used in conjugation with the paddle shifters behind the steering wheel.

The Vogue is credited with offering a pliant and plush ride quality in city traffic at slow speeds. Even at high speeds the SUV is pretty composed and coupled to that unrivalled and terrific steering feedback, there isn't any looking back on a sacred head trip liasioning. One also can't neglect the brilliant Terrain Response System that has an unflinching role to play in your triumphant streaks of surpassing the most challenging external topography. (Honor those braveheart modes!!)

Credit too needs to be given to the legendary electronic air suspension that typically offers multiple ride height options and involves a combination of both driver's involvement and the car's intelligence to grasp that which particular setting will be best for a given situation. So we see that the Vogue with all these top of the line features comes across as the most tempting package for Sonu Nigam and surely can become yours too at Big Boy Toyz.