And to talk about his acting, with a stalwart like Pankaj Kapoor as his father, Shahid Kapoor is a blessed talented Bollywood Superstar. He had been nominated for best actor award for Jab We Met and earned the Film Fare Best Actor Award for Haider and the Critics Award for Best Actor for Udtaa Punjab.

Shahid’s choice of cars also affirms the belief that he is a man of style and class. We bring to you a detailed description of his exotic four wheels in his garage: The adorable and charming ‘leaping cat’ moniker from the British stable infuses an aura of sportiness and sophistication!!!

Highly regarded worldwide for its timeless design language and undisputed legacy, it has carved out a niche for itself and made a special place in the hearts of car enthusiasts.

Jaguar is the ideal epitome of fine luxury, uncompromised performance and dynamics along with being acknowledged for providing a stress free ownership experience to its discerning customers. 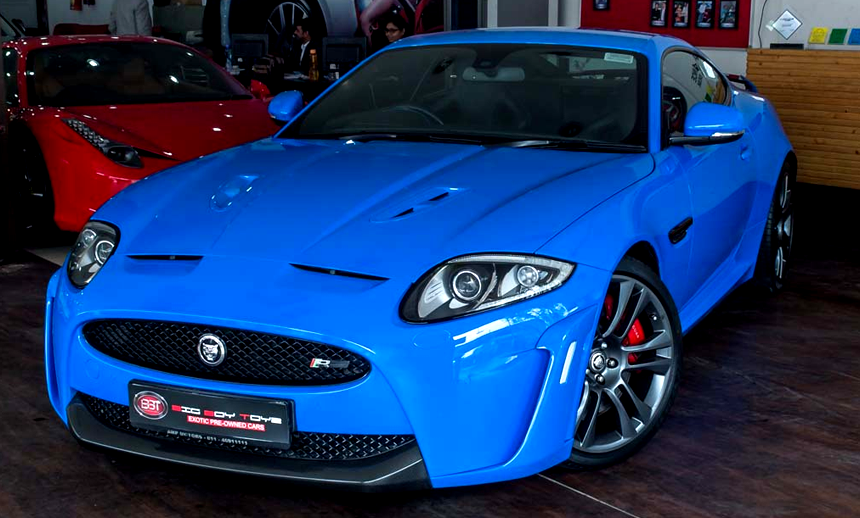 The product portfolio truly depicts the dedication and passion of the British workers to bring out the best in practical terms starting from the energetic XE, charismatic XF and the ever alluring and magnificent XJL.

But the one example that will surely satiate and fulfill your driving experience on a race track is undoubtedly the XKRS.

The flagship four seater sports coupe with its majestic curvaceous lines around the edges, grand silhouette when viewed from the side and the fine inscription on those gorgeous bulky alloy wheels beckon you to be one with this masterpiece.

The front end view is accentuated by the classy oval radiator grille and the meticulous placement of the eye striking louvres on the bonnet along with that pinpointing large air intake doing the grand talking. The overall ground hugging stance is evident through the side skirting.

The rear spoiler and the diffuser add a touch of dynamism and enthusiasm while on the move. The interiors expel a typical grandeur feeling of being seated in a British vehicle with impeccable fit and finish quality on the seats, the aluminum veneer on the dashboard showcasing the XKRS badge and the splendid sound from the 525W Bowers & Wilkins audio system.

The colossal 5000cc V8 engine churns out a breathtaking 542 bhp and 69.3 kgm of torque mated to the 6 speed automatic gearbox.

One can simply gauge the unadulterated power by a slight tap on the pedal which sends this beast ahead at the whisker of a second.

The excitement elevates yet again when you find an open deserted road and engage the dynamic mode and put the monster through its paces all day long and cherish those fine moments later on. For Shahid, the XKRS has always been like a close companion and a family member and he is often spotted during the night time on the Mumbai roads taming this exquisite British machine. Striving for excellence and supremacy in all spheres and showcasing your inherent instinct and conviction towards the work depicts the German Car Manufacturer’s brand philosophy and ideology.

The founder Ferdinand Porsche, based upon his keen eye for detail and acumen took it upon himself to make Porsche as one of the most respected and revered brands across the globe.

A glimpse into the famed product portfolio lends us to infer that the classic lines and design cues are still prevalent on the iconic range of sports cars such as the 911, Cayman and Boxster thereby keeping the history and tradition alive. And the one name that strikes our mind when this brand is in discussion is the Cayenne. A full sized SUV boasting of one of the modern age architecture and superlative driving dynamics, much to the taste of the ardent brand followers.

Things become more enticing and enthralling when one is face to face with the spear header variant of the Cayenne known as the GTS. A one look at exterior tweaks in the form of large air intakes upfront along with the beefy 21 inch sport wheels will justify further that this car is meant for some serious stuff.

The added side skirting (ah! our carryover effect from the Jag) blend well with the majestic wheel arches and at the rear too the cylindrical exhaust shaped pipes take the centre stage for their menacing growl. The faultless interiors carry a perfect fusion of sportiness and sophistication along with ergonomic placement of switches and buttons on the elegant dashboard.

The state of the art 4.8 litre V8 is a no slouch and with the humongous 420bhp of power and 515Nm of torque, it can go head to head with some of the puffed up sportsters and coupes too. The eight speed torque converter with the seamless gear shifting and well spread ratios will never give a reason to complain.

Its blistering performance and aural bliss from the exhausts can be experienced on an open twisty road and to further elate and keep you busy is Porsche's active suspension management that automatically adjusts the dampers to suit various conditions. Indeed this one is the most tech savvy possession in Shahid’s exotic garage. This exquisite four wheeled SUV is a blend of elegance, refinement and finesse. Its understated looks portray a supreme image along with exhibiting a mature and poised stance. The legendary any where go capabilities that simply makes this vehicle an all-time hit with the potential buyers.

The timeless exterior appearance doesn’t boast of the flamboyant taste but still manages to impress by its gigantic dimensions and well chiseled proportions. It comes across as one of the most tempting packages for people who desire something out of the box and still want to announce their arrival in style.

The top notch interiors with impeccable stitching on the leather seats and the texture on the dashboard truly spellbound the occupants inside.

It conveys the oomph factor pretty well by its stupendous acceleration and exemplary agility.

The terrain response system on offer gets a winning trick up your sleeve by enabling you to surpass the most toughest of turf conditions confidently.

Being a Range Rover, the Vogue is an honest last word of steadfast dependability up its sleeve for a consequential grooving upon....... Innovations, new- fangled contraptions, breathtaking innovations and curving out an undeterred path for future automotive mobility is truly reflected by the Stuttgart manufacturer’s tagline ‘The Best or Nothing’.

Since the very beginning, opting for unique mechanisms to give notions, ideas and perceptions a practical shape has made the German Luxury Car Maker distinct and noticeable.

Being pioneers of automotive technologies and reshaping the imagination and belief of customers towards the industry forms the very basis of the brand philosophy at Mercedes Benz and they have showcased it through their advanced product portfolio right from the stylish A Class to the mighty AMGs. The SUVs too portray an exclusive charisma and charm of their own and to quite an extent replicate the owner’s personality and identity. Shahid being the proud owner of two of the most renowned SUVs from the three pointed star’s stable, the ML Class and the GL Class. A Mercedes truly makes every occasion as special and memorable and so it was for Pankaj Kapoor, Shahid’s father who was gifted the ML by his son on his 60th birthday. That says it all. The GL Class is a quintessential of supreme luxury, extravagance and opulence. Once again owning a Mercedes Benz gives a person that sense of satisfaction and gratification that he has made it big in life, which is perfectly exemplified by the B Town actor in this case. Shahid’s potpourri of cars with the jewels like the sporty XKRS, beguiling Cayenne GTS, gracious Range Rover and the progressive SUVs from Mercedes can be found in the crown of Big Boy Toyz.