"The heart wants what it wants"

Thinking....thinking and contemplating, we won't put the saying through a coin flip sort of.... a flagpole treatment....

Because emphatically it holds true when one desires and craves for that extra special something that sets heartbeats racing on first glimpse.

Coming to our felicitous fabrication!!

We as staunch car enthusiasts were completely bowled over when our eyes lay on the most alluring grand tourer from the city of Modena, Italy, popularly known as the Maserati GranTurismo Sport.

A two door, four seater coupe, the GranTurismo Sport is one of the most exclusive and rare offerings from the Italian Automotive Giant for the allegiant fraternity. The vehicle was unveiled at the 2012 Geneva Motor Show and since then there has been an endless outpouring of tremendous accolades and appreciation from the automobile critics for the preeminent Roman ingenuity.

We couldn't help admiring this beauty and marveling at our favourable zodiac predictions for the day, we went for a full exhaustive review of this Italian beast.

Beauty at its best! A flurry of exclamations follow when one gets a mere sight of the Maserati GT Sport. It is evocative of a decorative sumptuous paradigm and a short stint with this exquisite masterpiece will allow the GranTurismo Sport's design to quickly grow on your senses.

The car design looks purposeful and dynamic along with a hint of practicality and sportiness that does an edifying stacking up of the sentimental tender feeling.......... The front end looks striking and fanciful and turns head while the GT cruises effortlessly down a busy street!!

The long bonnet has fine distinct creases flowing seamlessly downwards and together with the big ovular radiator grille that is stocked with 19 vertical concave chrome slats, the sight is akin to an exceptional artistic creation.The ever famous and royal Maserati Trident logo is positioned neatly in the centre of the grille and looks flattering. The distinctive outlining of the headlamps is an offbeat innovative design concept and truly sets new benchmarks in the segment. The vertical configuration of the LED daytime running lights along with the circular shape of the bi-xenon lights and turn indicators are a real treat for the eyes. The semblance is a subtle extracting from the nimble witted noble clan who wished to give some complementing add ons to the central figure of focus......We bet you know what we are talking about? 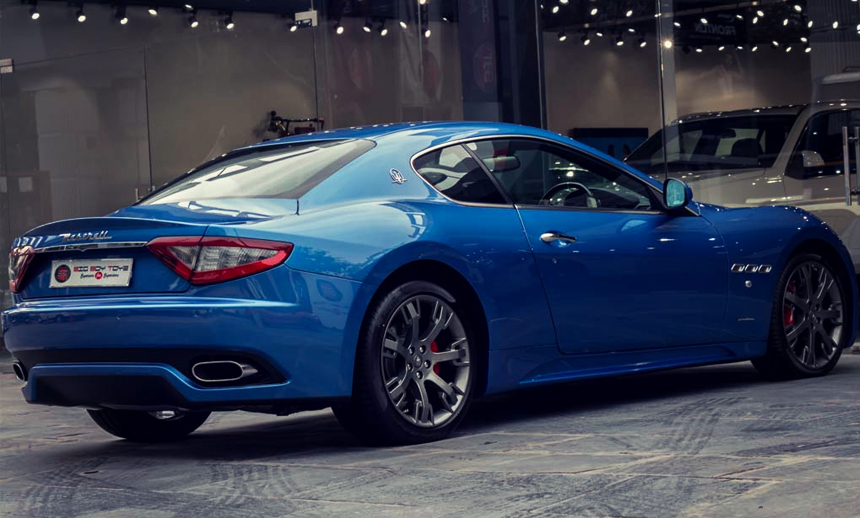 The side profile in all honesty can be given the "exhibitionist's" tag and qualifies to be a real attention magnet with that stylish pronounced and arresting subtle haunch(we'll term that as a harmonised effect) near to the shiny Trident emblem that merges perfectly with the boot.

The car when seen from a straight horizontal view looks impressive courtesy the fusion of a retro modern design language. The Italians have indeed come up with a splendid machine on four wheels that can give a tough competition to more ostentatious offerings from other rival brands. The enticing triple air vents on each side behind the front wheels look contemporary and are a reminiscence of the legacy and prestige of Maserati's design philosophy. The grace and charm of the 7 spoke 20 inch silver Neptune wheels with red brake calipers in the background beckons to be admired, while accentuating the observable appeal. The rear profile looks swanky and gorgeous with the alluring integrated spoiler and glittering curvy shaped light panels (left, right) that are adjoined by a sleek chrome boot lid lining, above which sits the well chiseled Italics sculpted Maserati inscription. The oval shaped exhausts are placed in a black housing and emit a blissful roar when in action, which is a delight to experience.

A Sporty Setup on the Inside One of the most well- crafted interior setup beholds you on entering the GranTurismo Sport.

The meticulous arrangement on the dashboard with a host of switches and buttons is one to reckon with and speaks volumes of the Italian craftsmanship and ability in bringing out one of the best cabin ambience experiences. The clock placement in the centre of the A/C vents with a chrome outlining exudes a regal touch!!!

The Maserati Multimedia System consisting of the 7 inch screen apes the know stuff ways & means to ring the bells of ..........being "tuned in". The plush seats engulf you in extreme comfort and the side bolstering prevents a person from swinging around when the car is fully enmeshed in a climax of plucky deeds.

The minutest attention has been given to the eye catching fantabulous upholstery that is simply next to none. The sporty seats with the integrated head restraints truly arouse the racer feeling within an enthusiast. The Trident logo is embedded with extreme care on the head restraints whose look is complemented with fine stitching on all seats, thus raising the opulence factor.

One can even opt for the heating option and driver's seat memory setting falling under the rousing 'Comfort Pack' to buck up the enamouring heady species....... The three spoke multi-function sports steering wheel is a delight to hold and eradicates the snarling effects with its up to the task powered height and reach.

Its speed sensitive nature is the qualified sum and substance denoting the continued good vibes...........!!!

The Maserati fidelity sound system lends contentment and gratification with its crystal clear sound experience and don't minify the plethoric rejuvenated state as the elective Bose Surround System would happily play a sorcerer's spell of wooing you in sizable proportions. The rear seats are like giving reins to a sure shot takeaway gratification!!!

Spending some frutiful moments at the back never left us wanting for anything else and we did not have any cause for complain as the rear setup too is inviting and soothing just like its front counterpart. A lively and spitfire 4.7litre naturally aspirated V8 petrol engine churning 460 bhp and 520 Nm of torque steals the limelight and takes centre stage with its enthusiastic and eager nature. The 6 speed ZF tranny with the MC Auto shift software doing honors on this GT carries with it a whale of sensation to flabbergast you with its brisk and harefooted nature of enumerating the barbarian throttle blips on downshifting.....ahem! For a fact, you would like to discharge the devoted noumenon but done with that vital spark of fanaticism.

One is surely in for a treat!

The gear shifting is smooth and precise and delivers exceedingly well on every parameter that enables a person to enjoy the ballistic surge of power on tap. The Maserati GranTurismo Sport can do some serious high speed stuff that translates into a 0-100kmph timing of 4.7 seconds with a top whack of 298 km/hr.

This GT truly transcends one's driving experience with the highlight being a dedicated SPORT button which unleashes the raw potential of this sporty grand tourer. Boy oh boy! The Maserati truly acquires a beastly form and surely the enthusiasts know what follows next.

The fast gear shifting and prompt accelerator response beholds one and is party to exclamations. The aural bliss of the exhausts is addictive and since the bypass valves get opened on pressing the sport button, even the onlookers have a thrill for their ears.

The renowned adaptive 'Skyhook dampers' stiffen up vowing for the extra bit of derring-do confidence at high speeds to put the car through its paces and one can indeed witness sheer agility and uncompromised dynamics to the fullest.

Alternatively, on disengaging the Sports mode, the ride aspect equals to a soothing palatial climax as the dampers soften a bit and the GT counters the bumps and road undulations with utmost confidence.

Whats the trick behind it all? This is what Maserati's detailed brochure reads!

The sophist intellect at its best!

The modernistic computer controlled Skyhook suspension system ensures one of the most pliant ride qualities on board through active control of the damping setup, without compromising on the sporty aspect.

The mechanism incorporates the use of acceleration sensors that register the movement of the vehicle and the wheels.

This data is skillfully transmitted to a control unit that further interprets the road surface conditions and adjusts the shock absorbers accordingly to suit one's driving style. Knowing the sapient skyhook's craft of rendering the deliverables to backtrack the handicap effect enables a "drawn fine" insight straight from the roots.....

Learning the ropes of Maserati GT's indefectible venturesome pinnings stealthily makes you the track's dreaded predator who everytime has a new skill to gloat with merriment....... The Maserati GranTurismo Sport proves to be a real deal breaker with such a stupendous level of performance and dynamics and courtesy the legendary Trident logo, it charts out a distinct identity for itself. And for now, the exclusive four wheel exotic can be experienced with sheer enthusiasm and admiration at Big Boy Toyz.