The Singham roars and coupled with the intense brooding looks make Ajay Devgan the current He Man of the Indian film industry.

A successful stint in Bollywood has conferred four FilmFare Awards and two National Film Awards along with the prestigious Padma Shri which has been a remarkable feat till date for the actor.

Happily married to the film actress Kajol and blessed with two children, Ajay Devgan has kept himself away from the usual film controversies, politics and gossips and is known to channelize his energy in producing and directing movies.

The action hero and car enthusiast has a varied and enviable collection in his garage listed below and being the ever loving husband as he is known to be, has also gifted his wife a Mercedes GL Class and an Audi Q7. He also owns a Maserati Quattroporte

The four wheels bearing the classic Trident Logo from the house of Bologna, Italy are indeed a perfect blend of timeless design language, sportiness, elegance and supreme comfort.

A full size royal luxury saloon that has stupendous performance on offer and for Ajay Devgan, it was love at first sight which turned into an eventful ownership experience.

The 2006 example owned by the actor is a real head turner for the crowd. It boasts of a culmination of modern and historic design theory to keep the brand heritage and legacy alive.
The ovular front mesh radiator grille housing the Trident badge looks purposeful and imposing and despite being a decade old, still hasn’t aged significantly and continues to look fresh and appealing.

Its enormous side length with a grand coupe like stance towards the back is a treat to watch and coupled with those chunky big alloy wheels, truly transcend the appeal of the car to a different level.

The rear end is the one where a person gets to know the true sporty nature of the vehicle with the circular shaped dual exhausts on both sides integrated in a black housing that add further to the glamour quotient.

The meticulous detailing and stitching on the dashboard and leather seats set different benchmarks and add to that the ergonomic placement of buttons and switches which surely cannot be missed.
A fusion of sportiness and luxury beckons a person to enjoy the backseat comfort after a heavy board room meeting while taking on the wheels occasionally to satiate his desires.
The colossal and time tested 4.2litre V8 petrol motor with 400 bhp and 451Nm of torque is a front runner artisan performer when it comes to the numbers game.

The blistering surge of power and acceleration on offer will never leave you disappointed. One enthusiastic dab on the pedal and all apprehensions take a back seat.

With class leading dynamics and a host of bells and
whistles to cocoon in the lap of Italian luxury.

This exquisite piece is Ajay Devgan’s most exotic possession in his overall car collection and it is believed that he was the first Bollywood Actor to purchase the Maserati in India, which reveals his extreme love for the brand. 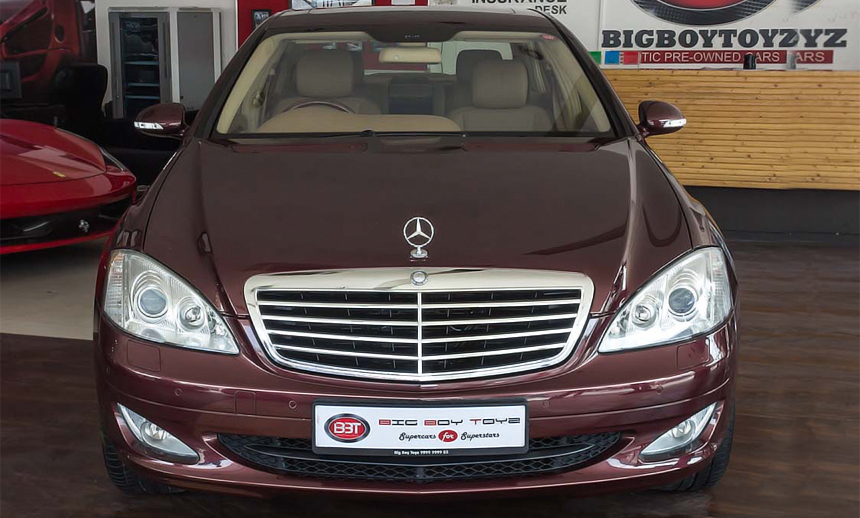 Technology, progression and novel introductions are an ideal representation of the much loved automotive brand of Germany, known as Mercedes Benz.

It is truly a lifetime experience to possess a Mercedes Benz in your garage and for Ajay Devgan, a tryst with the royal S Class and the enticing GL Class has indeed proved fruitful.

The actor’s W221 S 350 CDI is an icon of sorts and with its popularity worldwide is the pick of the lot for discerning buyers.

The alluring exterior design beckons a person to take note of the supreme architecture that has been well thought of and conceptualized and been made possible in practical terms.

One can engulf and cocoon himself in the best interior setup that makes you feel at home. The performance and grunt from the 3litre diesel engine makes way for both long range cruising and exciting high speed rides. A Mercedes Benz sprites up all occasions and for Ajay Devgan, gifting the GL 350 CDI to his wife Kajol on her birthday was a truly a heartfelt moment. The enormous SUV beguiles on lookers with its large dimensions and serves as an escape route to off-roading and adventure trips. Owning two flagship models from Mercedes has been indeed been a dream come true for Ajay Devgan. The famed tagline of ‘The Ultimate Driving Machine’ just got better with this unique and distinctive two door hardtop convertible known as the Z4.

It has spearheaded the company’s dream and vision to attain a formidable position in the sports car segment thereby catering to a more niche set of customers that desire something different from the usual run of the mill sedans.

The enchanting seconds, in which the top opens and closes is simply breathtaking and fits the bill to be the real deal breaker. The practical interiors with a meticulous arrangement and ergonomic layout gives a reminiscence of other BMW models, so one gets a sense of similarity being inside the Z4.

The sportster uses a top of the line 3litre, inline 6 cylinder twin turbo motor with 302 bhp and 400Nm of torque mated to a seven speed dual clutch gearbox.

Courtesy its 50:50 weight distribution and the eager nature of the transmission box, the Z4 completes the 0-100kmph timing in under 6 seconds which is really impressive.

The old age British brand has been a fantasy ride for a majority of Bollywood Superstars, and for Ajay Devgan, owning a MINI Countryman in his garage reveals that he is a true car enthusiast in person.

Its mere presence garners admiration from one and all and with the mesmeric combo of the semi cylindrical front radiator grille and sweptback headlamps, things surely go in one’s favour when he cruises down a busy street in this exquisite beauty.

The jazzy side profile with looker doors, stylish semblance and the thought provoking placement of the circled shaped exhausts at the rear truly act as showstoppers. 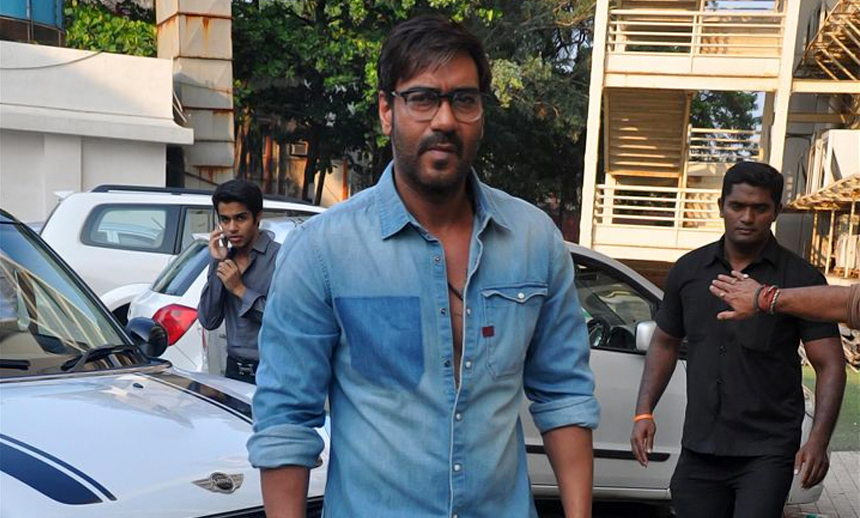 The Countryman is meant to thrill you with its exciting performance and it surely does, courtesy its 1.6 litre twin scroll turbocharged petrol motor developing a propelling 181bhp mated to a six speed automatic transmission.

Take a bow for its wildfire like contesting to get the indispensable grand standing in its eminent forte.

The MINI is an epitome of style and sophistication and meant to announce your arrival in grand style, a trait which resembles the superstars of the B town. 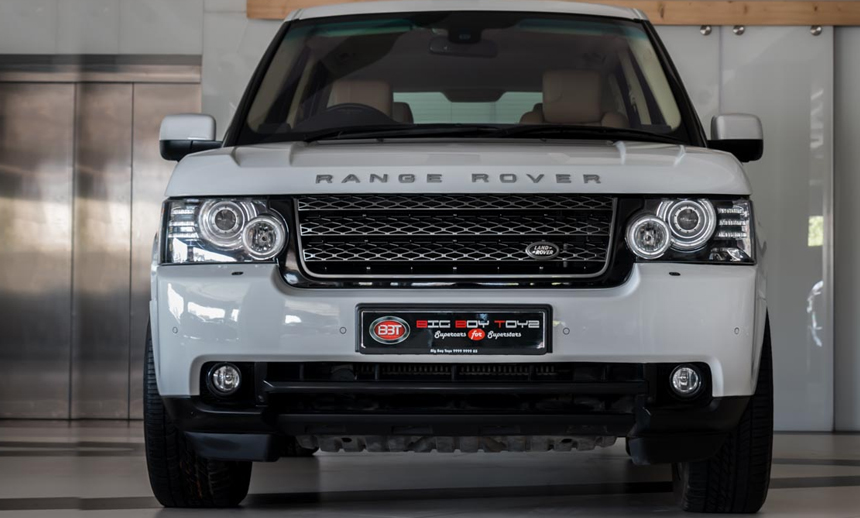 The exclusive offering from the British stable portrays a supreme image for the ardent SUV aficionados. Known popularly for its standout boxy looks, almost all models from the Range Rover portfolio carry forward the English legacy and heritage in the most exuberant way. The one example that has been the most famous of all with a frenzied Bollywood liking is perhaps the classic Vogue. Ajay has a fond liking for the colossal SUV and its macho and muscular appearance truly complements his dynamic personality.

The classic cabin setup represents some great historic touches in the form meticulous placement of control switches and buttons on the dashboard and high quality stitching on the leather seats.

Ajay Devgan’s unparalleled love for SUV’s knows no bounds and this further proved when he gifted the ever charming white Audi Q7 to his wife Kajol on her birthday, which the lovely couple cherishes till date. A great collection surely to turn one green with envy! Ajay Devgan has excelled in all genres of films and also as a great car enthusiast is a strong inspiration for the petrol heads.