“Some days, nothing really beats a good drive”

We are ready for our next much awaited automotive trip that begins from the capital of Italy, Rome to the city of Modena, via the well formed and full figured E 35 Route......(Peer deciding)

There is a famous saying ‘In Rome, do as the Romans do’ largely meaning following the customs, habits and traditions of their motherland.

And so with their cars!

So exactly what will we get to drive this whole road trip set in the midst of a plush green forest countryside and a relatively fast moving traffic on the highway? The observative virtues were honestly put under a spell when the Car Rental Agency sent a red colored convertible for this exciting and thrilling drive trip.

It was none other than the Maserati Gran Cabrio!!!

One can imagine that when the introduction has been so dramatic then how the driving experience would be.

Let us keep you guessing till we reach there. We have had encounters with so many solo convertibles, but this interaction was something really different.

It’s a perfect Italian Maestro that spells richness & class along with making your day special.

It will leave a lasting impression in people’s minds because of its rarity & exclusivity.

So much so that when you get to drive it, a "MAMMA MIA" involuntarily pops out of your mouth!

And we can't help but go in raringly for a purposeful review.... The Maserati trident logo with the upward spear look has a deep meaning & significance. It is an epitome of the city of the Bologna, originally where the production started before being shifted to the city of Modena.

For a layman this signage will represent success & growth in all spheres of life truly being exemplified by this car.

ONE OF THE MOST CHARMING & DRAMATIC EXTERIOR It doesn’t look quirky or out of place and blends really well with the overall appeal of the car. It also indicates that how designers adopt peerless & innovative styling techniques & cues that portrays a strong departure from the old practices. The Gran Cabrio exudes an aura of sophistication and finesse while being regal and attractive.

The Rosso Trionfalee paint shade is simply one of the best we have seen till date & coupled with the trees in the background while on the highway drive can be a picture perfect display of emotion rendered on the bedroom walls of automotive lovers.... The majestic and awe inspiring LEDs & circle shaped fog lamps are surely a treat for the eyes and of course add to the aggressive styling that sweetens the kitty to the adept craftsmanship of the Italians. The side profile qualifies to be a true masterpiece and quickly makes a place for itself in one’s heart with its splendid design.

This swanky Maserati will surely be on an eye catching spree courtesy those striking triple rectangular air vents on either side which have a typical hangover effect for the keen eyes.

The detailing on the grey finished 20 inch Neptune Grigio Mercury Alloy wheels with the red brake calipers will surely leave you spellbound.

The 7 spoke witt extensions render a great level of expertise in sculpture and art work. The rear end of the sporty convertible steals the limelight with its charming and graceful stance.

Carving out a special design philosophy and making it successful on all production models is what the Romans are best known for.

The most striking part for us is the italics font for the Maserati on the rear along with the dual oval exhaust pipes on each side placed in the black housing which go in synchrony.......(a sudden first glimpse thought)

By far one of the most dramatic rear ends that is sure get eye balls moving and hearts fluttering!

GREET YOURSELF TO AN EXQUISITE INSIDE LAYOUT

The interiors present a fine grandeur of their own and on entering the cabin one cannot miss the fine detailing on the seats with the prominent Maserati logo on top.

The center fascia’s appearance with the classic clock & buttons all over is a tad ancient and a reminder of the good old cabin layouts of the 80s & 90s. (We aren't overstating....) Seeing the CD insert slot & its controls, one is surely reminded of the music track Cherry Cherry Lady by Modern Talking (We were for sure to say the least!).

Even in the music video, a timeless cabriolet (Ferrari Mondial QV cabriolet) has been displayed which goes in sync with the present convertible in discussion.

Maserati’s multimedia system along with the navigation churns out a wide variety of information and the display & graphics unintendedly permeate the liking for the Contradist pictoric on the house. A royal three spoke black steering perfectly fits the bill & grips really well in your hands. Ergonomics are spot on with no room for error.

Meticulous placement of buttons & seating height ensures that one is not left head scratching even after transacting a hefty amount..... The space inside the car is not an issue however you wouldn't wish for the fretting fumes on being seated low in the Gran Cabrio......(Ok, Ok, Must have a hidden positive motive....give it time)

The back occupant seats are accessible by daintly moving forward the front electric seats to which the Maserati proudly calls, the Easy Entry System..

So Maserati need not go on an examining quest of whether to see if it has fulfilled the first rate vibrissa much to the hotshot stripling's velleity.

IT IMPRESSES ON THE DRIVING ASPECT, A SENSE OF GLIDING ON THE ROAD WITH THE PACE. Powering this monster is a mighty 4.7litre V8 engine that churns out 440 bhp and a hefty 510 Nm of torque to be precise.

We have been a fan of the naturally aspirated motors offered by the Germans but this one had us hooked from the very beginning.

If speed limiting signs were not present on our way to Modena, we would definitely have tested its overwhelming 0-100 timing of 5.2 seconds and an astonishing top speed of close to 285 km/hr.

The transmission duty is taken care by a 6 speed ZF automatic box that comes out on top with its accomplished impending of premiering its secret weapon like caliber.

An enthusiast would surely like to put pedal to the metal & be pinned to his back seat the entire day.

Once an individual holds the steering of the Gran Cabrio, a freewill persists which begs him to unleash the raw power of the beast prevailing within. source - exportwagen
What's that tempting button on the dashboard?

The pleasure seeking acts are well taken care off by a dedicated sport button, pressing upon which, the Gran Cabrio exhibits some astonishing performance figures much to the delight of lovers.

A metamorphosis that renders the elegant Maserati to showcase its inherent lively spirit for a dramatic deluge of that something special which is more communicable by facial expressions. Italians are truly known to set their own benchmarks & be leaders in their respective domains.

The Gran Cabrio's polished demeanor is out in the open with its sleek cruising abilities and an exceptional ride quality for a credible clap and when the wishful intent awakens for a rip-roaring engagement, it's a word of honor from the Italians to keep the affair as tantalizing....ah! but not to the extent of being brutal.

The folks at Maserati don't want you to involve yourself in the bitter takeaways.

The neoteric Skyhook adaptive suspension does a commendable job of adjusting the dampers to one’s driving style and road conditions that makes it one of the dexterous companions truly.

Want a scientific explanation. Here it is!

The Skyhook’s skillful mechanism is based on acceleration sensors that detect the movement of the wheels and the car body.

The data is transferred to a control unit that processes it along with analyzing the driving style and deciphering the tarmac conditions and significantly making the changes in the dampers. Calling attention to the umpteen number of security aids......

Actually the convertible is fully equipped with a host of paramount guardians that won't give you the chance to rapidly delve into the past published chronicles to clear the air.......

The strong willed white knights......ohhhh they are the steadfast exemplars of sureness and certitude. 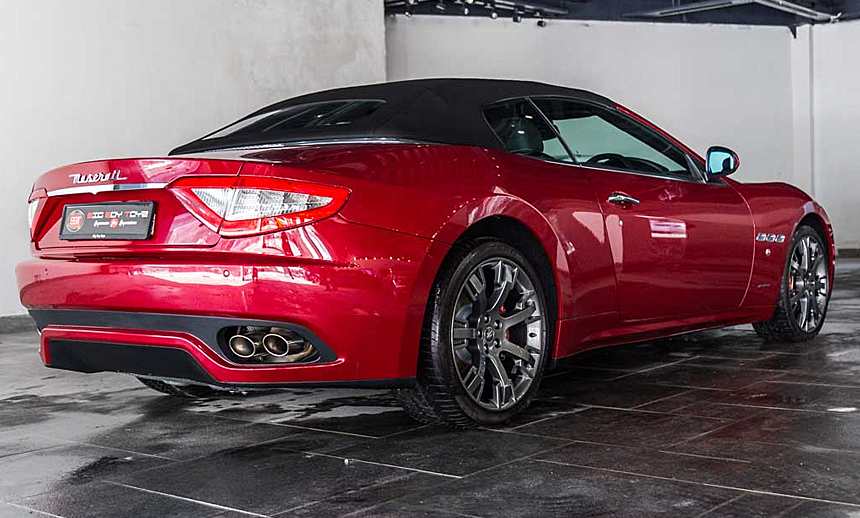 Maserati is steadily increasing its foothold in India.

Owning & driving one will set you apart from the already established luxury players in the market.

If you are bored & tired of the predictable German exterior styling & crave for something refreshing & unique, then the Gran Cabrio perfectly fits the bill.

It is an amalgamation & unification of fine Roman heritage & history coupled into a gorgeous convertible that is meant to look & feel different.

The trident logo comes close to being one of the most renowned & respected worldwide much to the delight of the aspiring lot.....

Can't expect anything more on a platter truly!

And for this exclusive Italian Masterpiece with astounding levels of refinement, sportiness and dynamism can truly be explored only, at Big Boy Toyz.