“Garnering a hefty “putting on airs” mien to trot out its “spectacular” dapper was perhaps the sole winsome title for an “in accordance with” tiara of royalty….for the looks…not really…but many other factors put together”.

Glimpses of the past and “riffling through” of the present, is it anyway that the meritorious B failed to impress you head on with its uptown and in-vogue chic that renders the role for that unusual semblance to a “staged” glorification.
Because Bentley knows how to skillfully manage its top flight fortes to get a huge appreciation….we bet, “with both eye’s closed!” And how does one come to that? Rocketing ahead with a touch of poise and sophistication, this fine example by the grand name of Continental Flying Spur emancipating from the intellect and acumen of Crewe’s cognizance is an honest attempt to honor the “typical cases” where the Englishmen have a definite leg up to once again bask in the glory of their revered trait of coming out with unparalleled archetypes.

The august object of infatuation represents a solo prize winning chapter for the British car maker and since it’s “bring into this world” vestige, everything’s been at the helm of affairs and wait a minute,…… the wiz-bang gang of performers at the headquarters have already squeezed past the touchstone directives via the divine future planning and upgradations so as….so as not to let go off that trendsetting phenomena…… (Hail the 2nd generation perfecto)
Rewinding the track
The exceptional born makers!!!! Looks out of the box!
Really, no denying that!
That of course will put you in a customary rhetorical mode for garlanding a verbose of sentimental and tear jerking anecdotes in favor of the legendary brand!
An old chestnut story from the past suddenly erupting and getting a perky limelight and from there follows the in process emotional connect with the stunning Flying Spur. There’s a certain willing demeanor of the Bentley to proudly withhold the eminent checker’s mark as you make way for a stunning camera shot of the frontal fascia.

Adding an extensive dose of eye opener (to make you dig more into B’s mesmeric practices) is the beautiful chrome mesh grille which honestly speaking appear to be a cut above the rest, we mean the run of the mill stuff.

The side profile tends to draw covers on those awkward looking first time perceptions even for the single minded and instead puts to pedestal a whole lot of well -proportioned and chiseled ideologies to be carried forth for a long time. It is designed with so much perfection, absolutely faultless. The rear end has an experiential aura of its own with the unusual regal flare that leaves an epileptic charm for the inquisitive onlookers. Call it a cherished avocation of carrying out the finest because the Flying Spur’s interior is a supreme exemplar of paramount finesse.

First up....
Admiring the matchless genre of the facile infotainment system makes you believe as if toggling through was a cup of tea without any expressions of disapprovals. Sincerely! Going over the top is one of Bentley’s outstanding traits which is recorded with great pride in your books and you will surely not feel deprived of the regalities after being in the lap of the brainy maneuvers ….well because the stalwarts wants you to have every worth of your penny. The rear seat cosseting is a choicest’s pride to be honest while the picker NAIM audio system enables one to be in the midst of a perfect concert hall with a crystal clear baritone luring the senses. 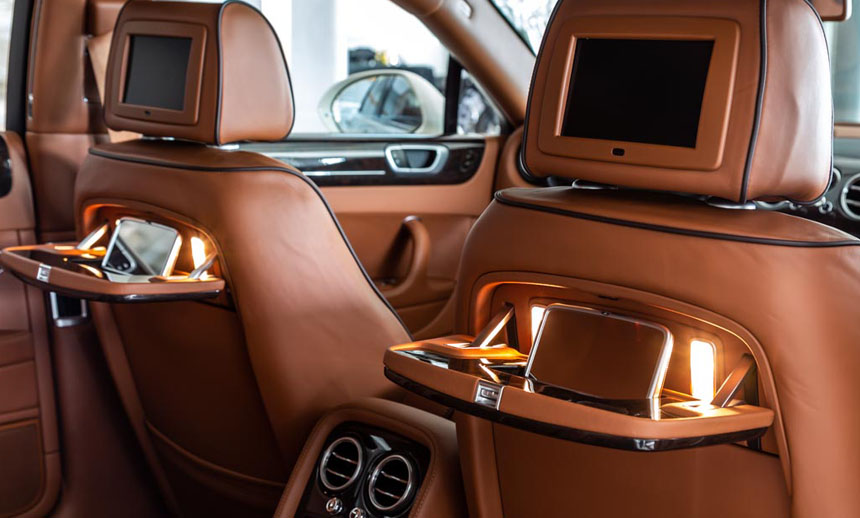 The aristocrats get another up hand reason to feel rewarded as the Continental Flying Spur unassumingly wins their “wisdom possessing”….how…by virtue of the !!! Well that can be counted as an “on the platter” offering for now! There’s absolutely no doubting the schooled interior functionalities of a brilliantly engineered machine from England because once inside, a patellar reflex reaction automatically prompts you that the whole caboodle is fabricated with a……….yes, a “start from scratch and well thought of” philosophy for doing wonders to the prolonged inside stay. Thinking of the colossal engine figures and numerals? (Bentleys are known for this!)
We can understand!
And greeting you this time is the time tested 6 Litre Twin turbocharged W12 petrol motor at your command which builds up a healthy and raring to go 552 horses and 650 Nm of torque.

It’s lively, sprightly, over -zealous and has quite a few engaging tricks up its sleeve.
That should exponentially merit a transformation of your speedball doings considerably till the time you don’t fall prey to an elementary assumption.

This Flying Spur will certainly not ruin the prospects of a fun engaging encounter. Extra brownie points for the astute 6 speed gearbox that never gets you in the prototypal “left wanting for more” because from the word go, it brings to attention a host of taking charge tactics.
Stimulating the master creation to exude a zenith parody of full tilts and whirlwinds means you are having a gala involvement as a slight dabbing of the throttle enables the FS to ride high on its acclaimed bragging rights!!! Others beware. The steering’s quick witted nature shows up extremely well at high speeds as it feels able bodied along with playing the influential showstopper for the rapid series of motions undertaken.
The suspension’s got a knack to counter the “keep clear” undulations of the tarmac to a good extent! The Bentley shows a stealthily composure while being drawn into a chain of double timers on the corners and what comes handy is the brilliant All Wheel Drive that shows its virtuoso canny formula of phenomenal road holding grip across the tightest of curves.
And surely more said the less it is for the guardian Stability Control that shows a resolute attribute to counter the tricky and uncalled for situations thereby winning the crown of a prudent savior. The Continental Flying Spur will surely strike a far reaching chord with you considering its barn door reasons to satiate one with endless gratifications along with the joy to relish an unsurpassed superlative symbol that’ll always reiterate the entrenched laurels. (The Bentley’s symbol)