Having been fascinated and charmed by the British Cultural festival admirably made a motion that the red lettered paintings and artwork are of great quality and precision.

What took place was an automatic pumping of an enduring presentiment!!!

"This also extends unintentionally to the classic range of automobiles that have a wide range of fan following across the globe along with being an epitome of style and sophistication.

The legendary English Car logos convey an aura and pride deemed of triumph and glory together with being distinctive in their own way." One symbol that has always caught the eye and awakened a royal feeling along with a racing instinct is none other than the ‘Leaping Cat’ known as Jaguar.

The mesmerizing forward leaning badge portrays success and jubilance together with revolutionizing the automotive world on a whole and paving ways for undeterred journeys. The  peculiar cognomen in Jaguar’s product stable which has really won accolades and appreciation from the automobile enthusiasts and aficionados for its meritorious performance on the race tracks in the good olden days together with representing every ounce of the company’s brand philosophy is undoubtedly the sporty looking XKR.

Since its inception in the Castle Bromwich Assembly of United Kingdom, its two iterations of coupe and convertible have been benchmark setters in their respective segments.

With the former for today's episode....

And here we start!

A Charming Beauty on the Outside The exteriors have a great dosage of splendor sumptuousness to elucidate as the eyes take notice of the palatable cues on this exquisite masterpiece.

The curvaceous architecture and design has been well thought of and executed by the English engineers and surely it wins hands down for being unique and distinct in its own way.

The retro modern fusion on the two door coupe might appear a generation older (well that's ok) to the last word day sports cars, but still holds a special place for itself in the hearts of the brand lovers that quickly capacitates it to be a collector’s item at the end of the day. The humongous bonnet upfront with the new and sharp whetted headlamp design represents a radical departure from the previous pre facelift model!

The stretched ovular radiator grille incorporating the Jaguar emblem gets a silver chrome lining on the edges and exudes class.

What exactly claim the substantial eulogizing one liners are the symmetrical arc shaped LEDs that are placed towards the outer portion of the headlamp housing.

The corner air vents get a generous dosage of chrome that replicate their shape and overall what transcends is a low slung pretentious design upfront for the onlookers. The side view with its grand silhouette narrates the perfect stance for this vehicle to be a companion for a wishful true to life close up shots.

The chunky and beefy black tincture finished 20 inch alloys with meticulous attention to detail inscriptions emanate the fire eating slant and compliment the muscular stance of this vehicle to a great extent. The supreme rear end is where the climax begins and thrills you with its poised stance.

The hilt factor keeping you gazed are the tail lamps unit expelling the dreamboat labelling for a place making in the far fetched lists of retrospecting. The  spoiler on the boot edge steps up the metaphoric "eyeful" byword proposition emphatically!!!

The quad exhaust tailpipes transmit an aural bliss that one would like to cherish each time upon hearing it.

Greet yourself to the most Beguiling cabin setup The interiors engulf you in their supreme opulence and grandiosity that is essentially been exquisitely made to feel one special on the move.

The heavy doors with a guarding word of honor give you the typical feeling of security and satisfaction inside a European vehicle.

The scrumptious trotting out of the dashboard along with the soft grain leather seats and the scintillating rising Jaguar Drive Selector truly transcend into one of the most thrilling and enchanting cabins going well with the onliest tastes. A slight reminiscence in terms of the cabin instrumentation to its siblings the XF and XJL(if you would be owning any of these.....we mean the familiar get a hanging effect) sedans is something that sticks out and thats no big deal as the individuality factor in terms of controls and drivability of this monster takes the crown and eliminates all apprehensions and speculations.

Fine touches such as the heated steering wheel, memory functions for front driver and passenger seats with buttons present aptly on the side doors..... count again.....one, two and many..... play a catalytic role in building the owner’s rapport with the beast incarnate.

The rear seats well, well......well, they manage to win over the prescribed of the hard to please by steadfastly housing their children and shopping bags!!! The 7 inch color touch central screen with its high definition graphic appearance further beckons you to toggle through the entire car mechatronics, phone and Bluetooth settings, music interface and so on.

The Bowers and Wilkins 525W premium sound surround system lightens your mood by offering crystal clear music on every drive and translates it into a joyous occasion and infuses more involvement in the already exhilarating drive experience.

The Monstrous Heart says it all! 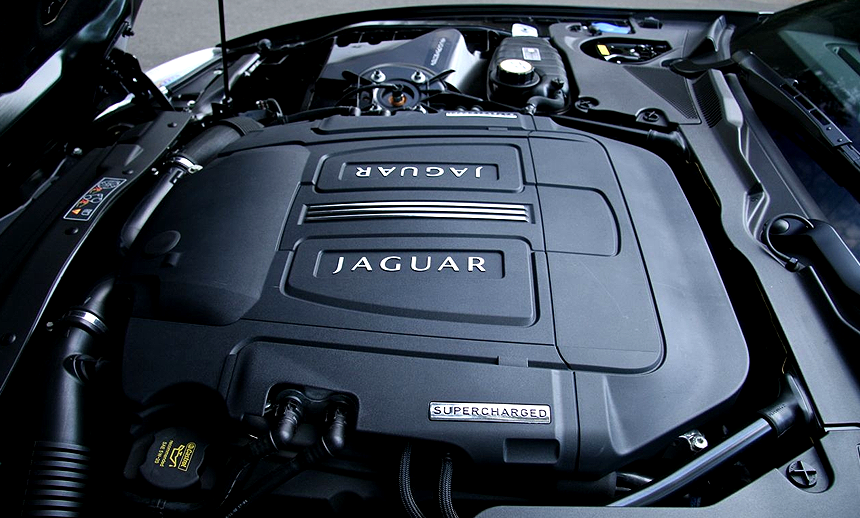 The colossal 5.0 V8 supercharged motor with an enormous 510PS and earth shattering 625 Nm of torque comes across as one of the most agile and effortless performers on all parameters.

The typical scintillating sound experience of the engine roar can be heard on pressing the Start/Stop button located near the rising gear knob.

This mammoth heart conveys its spitfire intentions rather well from the very beginning and needs a racetrack setup to unleash all the raw potential within for a subsequent pinning back feeling on the seat.

The lightning quick acceleration will send you into raptures of ecstasy and on a straight run testing this machine can do a 0-100 kmph sprint in 4.6 seconds with a top speed of 250 kmph.

The six speed unit's dexterity at work is like a sensational narrative to be told with endless "sing the praises" and glorifications.

Driving dynamics will need a new definition after spending some fruitful moments a twisty race track with this propulsive behemoth.And you'll definitely involve yourself in a  plethora of gnarly phrases after sampling the buoyant and energetic performer. The steering feels potently balanced and grips well in your hands along with weighing up nicely at high insane speeds. The vehicle maintains its composure while being cut across corners really hard and will happily keep the bury the gloomy winds of change. The Jag is "like a bat out of hell" to ratify it's blue chip justifications of a world beating streak to do wonders......everywhere and anywhere!!! source - performancedrive
Now some stuff for the tech savvy!

The intuitive and intelligent Adaptive Dynamics system, essentially a companion for the long wishful journeys evinces the jovial and gleeful countenance for it performs the "run with the ball" scenarios sincerely on the damping front to make the rapid widget efficiently roll with the punches.

Jaguar ensures that you up your ace as a crackerjack blue streak performer (no holding back on that!) as the posthaste Dynamic mode readily provides the means for an on the double gutty performance. Then there's the nifty Active Differential which sort of puts a cloth on the negative sinking feelings and makes you wonder again.....did tyre slips ever existed in your sole dictionary?

Ah! Aiding a complementary hand in the ecstatic tarmac runs, it adeptly caters for beefing up the desiderated rear traction and gripping....wow!!!

And that's when the proud citation of laurels comes in favor of the XKR for its peculiar and "breaking new grounds" practices!!!

A Desirable Package at the end of the day The leaping cat eats up miles on the road with its brutal and abrupt power ensuring a sensational drive ,the pleasure of which can be experienced to the fullest at Big Boy Toyz.