Framing the teenage akin ‘chapter and verse’ tenets for the spontaneous loved precedents was the one entitled parade wares shot to restyle the spoken words of laurels in favor of the unrestrained example of strong emotion.

Pretty well carrying out the proceedings as a modern day 21st century lad and backpacking the knack to verbalize the clocklike automotive dossier, gave us an impetus to be on the honed academician lines for an agog tale telling of the ‘up to minute’ Audi R8 V10 Plus……. Ah! It looks gorgeous in that sprightly Dynamite Red shade… You got to make a high note of your pleased as a punch state on seeing the coupe spellbind the gifted sixth sense!!!

Blessed with a blooming fortune for sprouting a masterly hook up with the wave maker central figures of zillions, we felt elevated at least ten levels above the prescribed stable to grasp the shipshape chalk talk of R8’s structured and orderly stratagems. 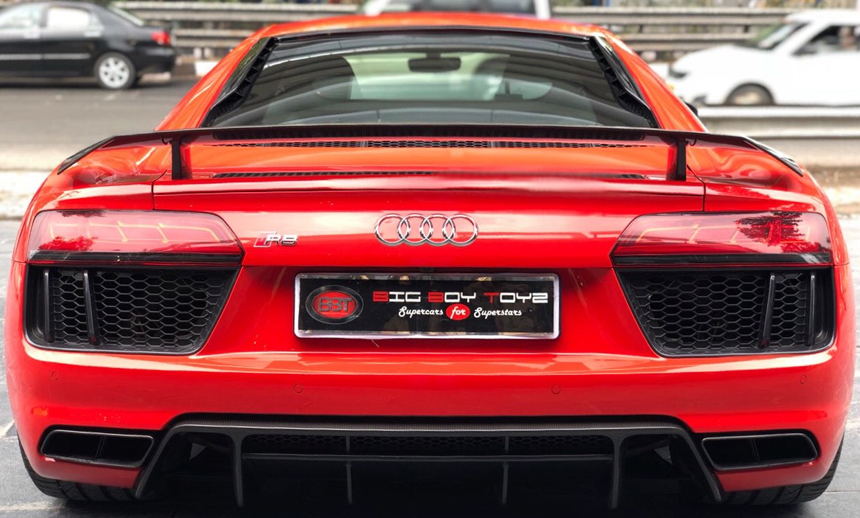 Readying the brilliant crackerjacks for the offbeat showdown!
Well the R8’s one of them….
Lend an earnest meeting of minds with the top drawer Deutsche savants who have succeeded undoubtedly on giving a whirl to its federated swiftly observables. Even before starters!!
Now that’s something…..
Enabling the primped up visuals to self- start the gutty unreserved eventual renders the presentment of the Inglostadt savage experimenting. Add some tempting breathtaking feat executions of the preceding breeding of the R8 which sort of multiplies the going aping effect…. With its amplitude of miniscule marvels and the revered tech savvy pinnacled tagline of the four ringed stable, the Audi R8 Coupe attests an array of vindictive moves in support of the big league crowning.

Keeping in tandem with the unordinary and gripping flashy cues on the outside……for an out of the proportion carryover effect in favor of the arresting cabin….. The new kid MMI interface and the virtual cockpit with their supernormal doses of entangling amidst the Audi…..archetype aromatic spread, deem to be the sweet natured complementing aspects.
Aiding the discoverer genius within you is the nifty steering that comes packed with the lock stock and barrel fillings….. Turning your attention to the initials B& O…….Oh, the Bang and Olufsen sound system…..actually consider it the inevitable soother on your action go downs!!!

3. An athletic game changer of all sorts Wasn’t this one the magisterial end all and be all ‘directive’ in Audi’s fetching strapping.
It is……to a large extent and learning the basal guiding spirits of the herculean 5.2 V10 naturally aspirated motor throws light on its boosted elementals….as the upped figurative of 610 PS solicits a raging bull analogous temperament for your initial recordings…(remember Huracan, presto runners?) Welcoming the 1st drooled over exclamation is the steady 7 Speed dual clutch gearbox which Audi wanted to broadcast with flying colors and first rate manuscripts…. Shedding off the remainders of the R Tronic?
We understand….

Seeing the R8 vamoose for a glorified run in the Dynamic mode entails unhesitating repeaters in pursuit of the one unblemished swan song.

Audi has ensured that your hero like stature doesn’t go unnoticed courtesy the stentorian exhaust tone…….. The Quattro too is a nice ally promulgating the incredible tractive theory and now it incorporates the brainy electronic and hydraulically operated multi plate clutch in place of the viscous coupling, thereby putting covers on some of the old school practices….. To be quite frank, the mean machine R8 with all the zenith engravings shoves the mental daring quotient to be the township’s proclaimed paramount dramatizer.
Leveraging the speedball bits will truly pertain to a passionate paroling followed by a diehard Audi fanaticism to lengthen the enticing contest.