Known for his easy breezy charm, Varun Dhawan is one of the most popular Bollywood actors of current times.

Born to director father David Dhawan, surely raises expectations from this young hero and he lives up to it exceedingly well.

His films which are usually light hearted comedies have been Box office hits with Badlapur being of a different genre altogether. Having won a few nominations, this hardworking actor has surely carved a niche for himself in the film industry.

And to talk of his prized possession, the Audi Q7, being one of the most envious, Badrinath and his Dulhaniya would surely love to take a joyride in it. The B town’s never ending love for the four ringed automotive brand is one to reckon with, and that has been a major catalytic force which indeed helped Audi to setup a firm footing in India.

The German Brand’s portfolio of models have tremendously matched the tastes of the Bollywood Superstars, thereby accentuating the feel and look good factor.

Keeping with the modern times reflects one’s ideologies and newfangled thinking and owning an Audi which itself is an epitome of progression and sophistication, helps the Superstars to be better identified with their younger generation fan followers. 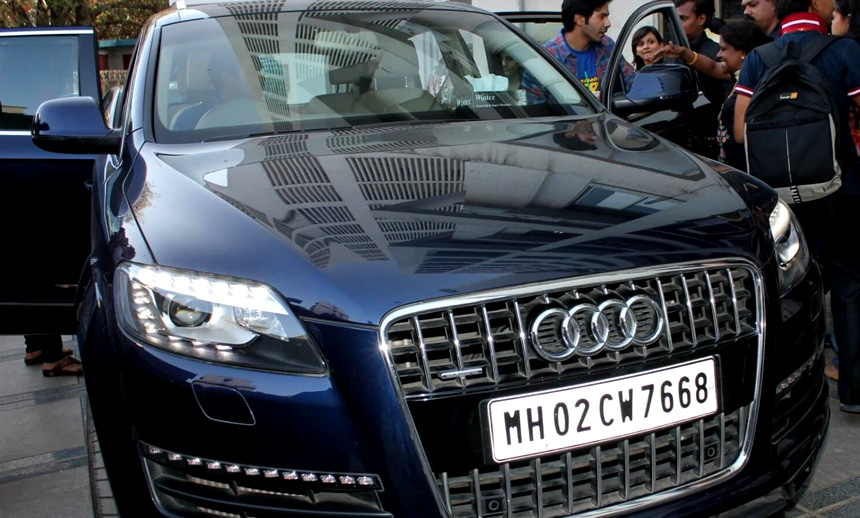 This has been true for Varun Dhawan, the current heartthrob of the film industry who is a proud owner of the gigantic Q7 SUV and cherishes every little moment of possessing it in his exotic garage. The flagship SUV from the Inglostadt stable was a stimulant in raising Audi’s brand acceptance in India when the company made its official entry in the country.

The models on offer were limited and there was a cut throat competition from Mercedes Benz and BMW who were fighting a war head on for the top most position in the Indian Luxury Car Market.

Being slow and steady in the race and anticipating the rivals’ strategies early did help Audi and the gamble paid off in the long run.

Associating the colossal Q7 with the celebrities, was an added feather in the cap and from thereon it was no looking back as every iteration of this SUV was deemed to be as successful as the generation it replaced. 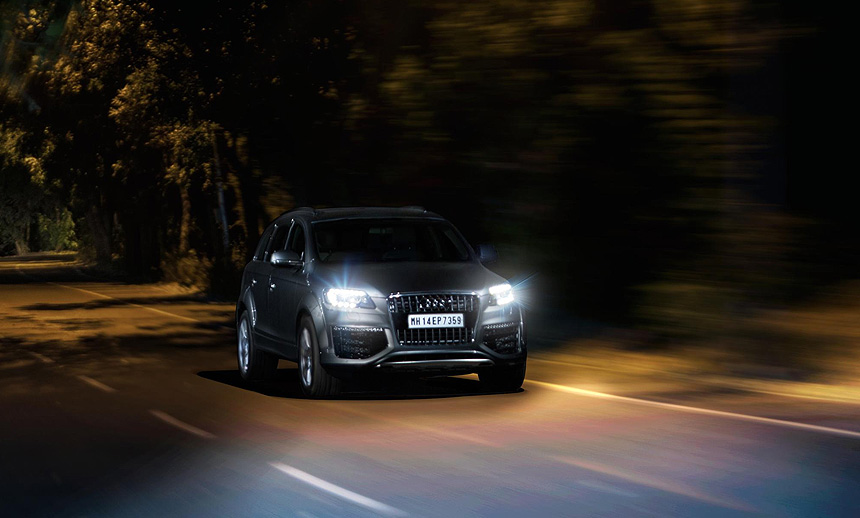 The classic and all- time favourite Q7 transcended with a subtle facelift later on and boasted of several class defining features and elements that further elevated its appeal to a different level.

The familiar attractive face, coupled with the beautiful jeweled and rectangular shaped sideway U inscription LED daytime running lights that form a major part of the charming headlamps, qualifies perfectly for a vivid gingerbread shot.

The big and wide radiator grille with the outer chrome lining housing twelve vertical slats in the middle on which the four circled Audi emblem is placed prominently, sort of propels Q7’s humongous dimensions and gives it that fierce and menacing looking stance.

The turn indicators in the typical Audi laden glorious appeal add a further note of delight and ecstacy for the avid exotic spotters doing their daily rounds. 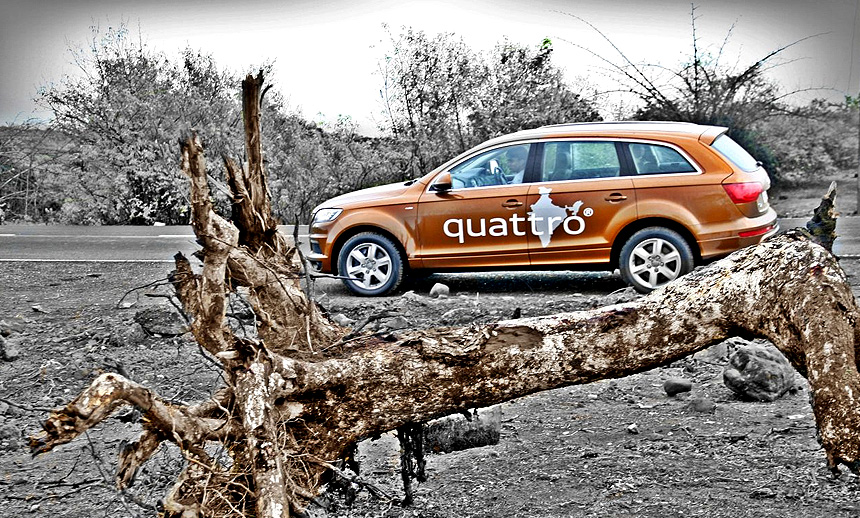 The huge length when viewed and admired from the side can give some renowned flagship luxury cars a tough competition. The monumental stallion like peculiarity gets the centre stage showing! source -motoroids
The rear end is one to talk about with the shimmering LED light strips that attract even more attention when they exude their sans pareil form at night. You can chalk out an influential narrative seeing the Audi's shapely persona from the rear.....actually all of that being a by-product of its in house specialized philosophies. The Q7’s innovative and sophisticated cabin setup is simply breathtaking on a first encounter. It is a real technological marvel with a plethora of bells & whistles to pamper and gratify you.

The level of attention to detail is simply next to none when one touches and feels the dashboard quality and the leather used on the seats.

The 4 spoke steering wheel grips well in the hands and the buttons and switches on the central console are well within reach.

A person driving the Q7 for the very first time will not have any cause to complain related to ergonomics as every little aspect has been well catered for. The intuitive Multi –Media Interface as an ace playmate is an icon of sorts and sets new benchmarks in the segment with regard to its effective functioning and the ease of toggling by a user.

A diehard Q7 enthusiast can surely fall in the lust of the impeccable go downs as the wavemaker Audi sets in motion an unfluctuating and repetitive mania for its interiors. The enormous Q7 is propelled by a massive 4.2TDI churning out 340bhp and 800Nm of torque which by itself is explanatory that irrespective of the weight of this behemoth SUV, there will be no compromise on the performance front.

And it did prove right!

A slight press on the accelerator will surely get this machine moving at a fast pace, but all of that is done in a very sophisticated and linear manner. At standstill, when the engine is idle, one wouldn’t even know that there is a diesel unit functioning under the hood because of the excellent refinement levels of the motor.

The 0-100kmph timing is approx 7.2 seconds with a top speed of close to 240km/hr and this indeed conveys Q7’s inherent potential and ability to come out on top as a real world performer.

The 4.2 TDI motor is mated to an eight speed tiptronic gearbox which is largely based on the mechanism of the six-speed unit, the main advantage here being that it is tuned to reduce fuel consumption by up to five percent thereby maintaining a balance between sportiness and practicality.

The eight speed unit may not put a big smile on your face as the dual clutch S Tronic box, but still anticipates one’s driving style and adapts to it intelligently.

The Q7 rides particularly well in city traffic and the way it takes on the bumps and potholes is worth applauding.

Apprehending the heavy weight and the 'fly in the ointment" body roll at high speeds when in the mood to cut tight corners or burn some rubber.

The folks at Audi have an answer to every grouse.

The advanced Audi Adaptive Air Suspension along with the its various modes is indeed a blessing and completely transform the Q7’s on road mannerisms and dynamics by a mere flick of the rotary knob.

It becomes a completely different ballgame once the Dynamic mode is engaged as it reduces the ride height thereby portraying the Q7 in the enthusiast’s mind as an able machine for the extravagant indulgent episodes. More fun can be experienced when one wants to go off-roading and provision has been made for that as well. The off road mode raises the body of the car to a certain extent so as to ward off the threat from potential physical obstructions.

This mode allows for the nitty gritty deliverables to remain well under control. One can even raise the body height via the use of MMI without having to engage the off road mode (that's the nifty lift mode in action).

The eggheaded Auto mode is well versed enough with your intentions and external recordings to present a quick witted form of the SUV at your beck and call. We surely hope to see Varun act more in rom coms and add more to his car collection so we at Big Boy Toyz get an opportunity to tell you more of the same.