“Being simple and understated really doesn’t put you out of the race, rather lets you make a lasting impression and leave your mark.”

As they say, “simplicity is the ultimate form of sophistication”, a quote which finds relevance with those that never compromise on their charm and elegance and even surpass the framed yardsticks for that matter. 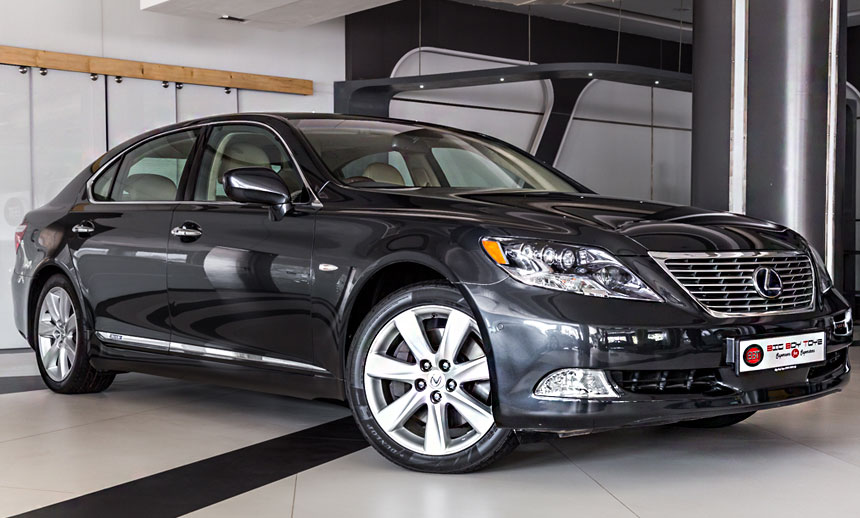 For ardent petrol heads like us, finding a true match pertaining to the magnified adage was never really difficult since we had heard and read a lot about the slanting L brand owned by Toyota.

And what strikes the grey cells instantly.....is this!

"Worldwide appreciation, positive critic ratings and ownership experiences elevate the flagship brand of Toyota in a league of its own."

And dwelling deep into the product portfolio makes us realize that Lexus has an answer for everything from everyday practical driving to being chauffeured in the most elegant way.

If given a choice, we would choose the latter and be pampered in sheer comfort and luxury, the Japanese way!
Here it is. Admiration guaranteed and respect galore for the one mighty player from the land of the rising sun, Japan, which indeed has a lot going for it with a huge fan following, the LS 600h L.

The model in question is of the year 2010 manufacture and feels as new as ever. Call it an indulgence that wows you no end after a heartfelt full day's experience!

For starters, the ostentatious design elements, fancy lines and curves can be given a break as the top of the line LS 600h L aims to supersede your expectations with its uncomplicated and straightforward exterior architecture approach to pin down the senatorial show and tell. Well, it is the size that matters and gathers multiple feathers in Lexus’s cap.

A head turner of all sorts!
Yes in fact! It tends to stand apart with its contemporary looks besides giving a tough competition to the new age luxury offerings.
The Japanese have certainly nailed it with the LS 600h L’s design language.

For a car which leaves a breathtaking effect with its mega yet simplistic designing, it is wonder as to how the Lexus pampers on the inside and how extravagant it can be. The Easterners are popularly known for their warm and welcoming nature, every bit of which has been perfectly replicated in the LS 600h L’s interior setup.

The list of bells and whistles on the inside is pretty exhaustive and that very well take the pivotal position on the consideration list for the parameters of your next purchase. Firstly there is a scintillating aromatic fragrance that draws one more closer towards a staunch familiarisation with the intuitive dashboard and the plush seats!!!

Then there is the over the top dynamo acting climate control function further adding to the delightful involvement.

And needless to say, the king like feeling at the rear is at its peak with a host of controls at your disposal which certainly demands a noteworthy applause from our side. The grand personality in you gets an impetus as you develop a strong rapport with the car that only gets strengthened with time. A royal heaven in disguise!
(Experience it to feel it as the words will not convey the emotions and leave you wondering as to what we were trying to focus on) For the moments to be made more special, a spectacular Mark Levinson Premium Surround Sound System with 19 Speakers offers crystal clear music for the relaxing long drives or to make up for the heavy day at the boardroom meeting.

We didn’t miss the Europeans one bit after sitting inside the LS 600h L. It is so tempting, yet in a different way. And when you’ve been treated so well, then why miss a golden chance to explore the beast under the hood which is an astounding 5.0L, V8, longitudinal petrol motor spawning a massive 389 bhp..... and for the philanthropic and benevolent beings caring for the environment, there’s a pack of two electric motors (MG1-Primary generator and engine starter, MG2-drive motor) and a 288 volt nickel metal hybrid battery pack too, which makes this flagship offering a Hybrid. An auxiliary 12 volt battery is also present for the extraneous operations.

Ah! Did we mention that in the beginning!
The extra protective nature of the Japanese towards the environment stands as a testimony in itself. The LS 600h L’s exhilarating and spitfire performance is a treat in itself and discerningly the mondaine guys have something to cheer about!

The reason for their ecstasy is that the monstrous 5Litre gasoline engine in conjugation with the drive electric motor, MG2 constituting 221hp (the other unit, MG1, is used as an engine starter motor that provides no motive force) puts out a colossal 438hp of power and 520Nm of torque mated to the Electronic Continuously Variable Transmission (E CVT).

For the figure inquisitive minds, the LS 600h L is capable of sprinting from 0-100 in 6.3 seconds and boasts of a top speed in excess of 200km/h. Sounds impressive!

And that too from a high end Japanese sedan! Choose your favorite stretch of the Autobahn and witness the deluge of raw power within of this monster.

The Lexus is special and extraordinary for something else too! The way it starts. It is so quiet.
Really, this makes the supercar owners envy of your worthy possession when it does the talking in grand style and wins appreciation from the neighbors for you being a law abiding citizen.
And here comes the icing on the cake.

The way the car’s mechanism has been tuned to deliver exceptional fuel economy while reducing noise at the same time is akin to praises. The adroit electric mode serves as a viable additive for the everyday city traffic and low speed driving conditions thereby saving fuel to a great extent.

The calculative and brainy regenerative braking system also makes its presence felt when it skillfully transforms the kinetic energy into useable electricity for the recharging function.

The top of the line flagship saloon impresses on the driving front too!

It comes with the All -Wheel Drive Setup that caters to one’s high speed driving and cornering by providing exceptional vehicle control by adapting to the road surface conditions extremely well.

The Torsen Limited center differential system very meticulously varies the torque distribution depending on the driving, speed and road conditions. Accustomed to the standard range of a 40:60 rear biased split (straight line acceleration), the torque distribution is altered between 30:70 and 50:50 for providing optimum traction for any driving situation. Missing the Driving Modes!
Of Course they are present on the LS 600h L. Choose from the vibrant Power Mode (increases throttle response considerably), Hybrid Mode (ideal for city use) and the Snow Mode (especially for slippery conditions where the acceleration response is decreased considerably).

A dedicated switch has been provided too for the EV Mode (the all- electric mode discussed above) which is conducive for low speed city driving.

Then there's a little nifty control button to modify the suspension settings between comfort and sport!

So one's for the polished jaunts while the other is for a "too quickly"rhapsodic encounter with the slanting L.

Now the question arrives as to how safe it is? Being a Lexus, it is loaded to the grille with almost all top of the line safety features one could have ever imagined of.

There’s the Vehicle Stability Control (helps to avoid skidding while turning on a curve), Electronic Brake Force Distribution (varies the force of braking in accordance to a variety of driving situations), Tire Pressure Monitoring system, advanced parking guidance & the one which brings to date the unreserved ministerial vouch of safety is the advanced pre collision system with the Driver Monitoring System & Lane Keep Assist apart from the Dynamic Radar Cruise Control and plethora of airbags....... This makes the Lexus even more tempting and for a moment we were left wondering that even after seven years, the LS 600h L feels like a new -fangled innovation and sincerely the charm and elegance is still prevalent.

For a brand which takes the crown for the most neoteric conceptualizations and practices worldwide, a significant place at Asia’s largest exotic car showroom further raises its bar and for now the captivating LS 600h L can be discovered at Big Boy Toyz, the experience of which is simply unmatched and unparalleled.