The effervescent and the ever versatile Arjun Kapoor made a luminary advent with his first release ‘Ishaqzaade’. His portrayal of Parma Chauhan had shades of grey but it was enacted so truly and convincingly that he was nominated for the Best Debut Actor-Male. Most of his films have achieved mind blowing success at the box office making him one of the most bankable stars doing full justice to his roles.

Hailing from the illustrious family of Boney Kapoor and Anil Kapoor and blessed with the long lived acting genes, Arjun Kapoor is surely at par with other Bollywood actors when it comes to his upper crust exotic four wheel possession, the Maserati Levante. A one in a million creation from the land of Modena, Italy which brings with it a deluge of accolades and compliments courtesy the thrilling experience onboard to leave you speechless!

From the grandeur of the sleek looking sedans to the ravishing and extravagant coupe and convertible lot, Maserati as a brand always feels exclusive and extremely close to the heart with endless affections galore. The Italians are best revered for their enthusiasm, dedication and skillful craftsmanship, every bit of which is depicted beautifully in Maserati’s new offering, the Levante SUV. Even the name exudes a fine touch of sophistication and class to it, leave alone the breathtaking and enchanting exterior looks and a scintillating cabin experience to wow you no end. The Levante’s mesmerizing architecture is akin to a well sketched out landscape portrait that leaves the senses dazed. One wants to admire and credit the well chiseled body sampling that accords the Italian monster a unique and distinct charm of its own. The front end with its aggressive and contentious stance looks the part to be a head turner of all sorts. The radiator grille with the well- carved out chrome vertical slats housing the renowned Trident Logo speaks volume of the attention to detail to make this masterpiece look classy and exquisite.

The sporty pretext gets highlighted while adoring Levante’s grand side profile. How it blends seamlessly with the horizon that calls for a picturesque shoot! The eye catchy three slots for the air vents on the front fenders, crossover like appeal and tapering roof towards the end elevate its ostentatious tag of being something more than just an SUV. After all, it is Maserati! It has to be different. The rear end is also not behind in the race for being equally noticeable with its expressive and detailed layout particularly the new- fangled LED lights along with the showstopper dual shaped exhaust pipes on either side.

When was it last that a Maserati’s interior setup capitulated you that you still crave to explore it wholeheartedly once again! Well, it’s a golden chance to feel at home with the latest offering from Italy.

Heavens seem to descend on Earth as you get cozy with Levante’s impeccable and splendid cabin. Faultless and flawless, almost everything seems to be in place and it feels as if the Roman acumen perfectly read your minds while crafting the spellbound interiors which make for an etheral occasion to unprecedented luxury each time you open the door. 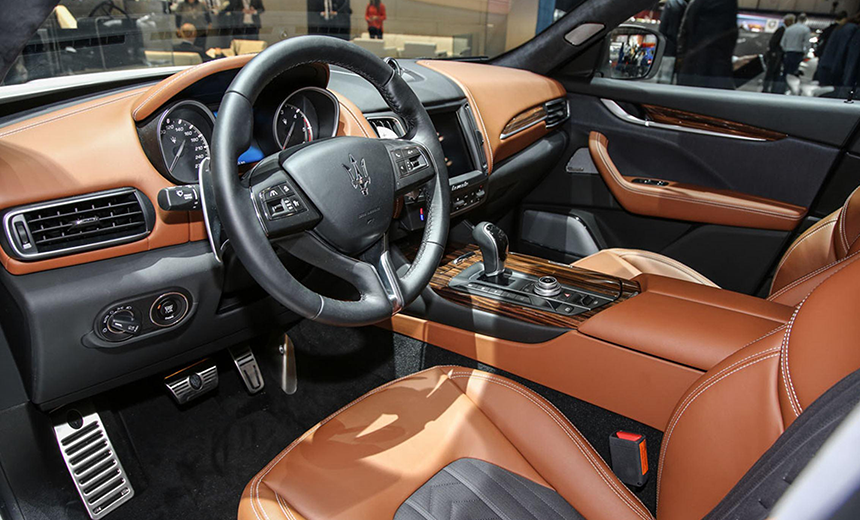 The well bolstered seats, rich cabin ambience, retro contemporary styling and the out of the box X factor Italian quotient come across as an ala carte affair that garners brownie points in Levante’s arsenal. And Maserati has got an ace 3 Litre turbo charged diesel up its sleeve for the Levante which does rather a fantastic job to supersede your racy expectations. Those 275 horses and 600 Nm of torque are indeed menacing and dramatic together with propelling this 2.2 ton monster from 0-100 kmph in under 7 seconds.

A sudden surge of power takes you by surprise that invites exclamations.
It’s a true Nirvana to experience the beast unleash! Praises for the 8 speed gearbox!

Of Course, the transmission with its eager and energetic shifting doesn’t compromise on the fun element which one desires from a car of this stature.

Deriving the best driving experience from the Levante is a step away that is sure to satiate your taste buds with a brilliant 50:50 weight distribution that inspires confidence for spirited drives and excursions. No doubting the Levante when pushed hard! The chassis remains truly composed without any signs of nervousness. Phenomenal it is!

Maserati’s trick of the trade to spice it up for all! The boon in the setup is the intelligent All Wheel Drive System that systematically adjusts the power distribution between the front and rear wheels based upon the driving and road conditions thereby ensuring maximum grip levels. (Either 100% power to the rear wheels or a 50/50 split between the front and rear if the situation demands it)

The forthcoming steering with its agile and responsive feedback tempts you to take it enthusiastically through your favorite corners!

For the extra worth of pleasure, one has a merry option of selecting the SPORT mode which is one among the various driving options available on offer to witness faster gear changes, less intrusion from the stability program and a roaring sporty exhaust note.

And another enthusiastic press on the button stiffens the dampers ….think, think…..oh yes, the dependable Skyhook which unravels its sturdy impending when you desired the level 2 of Maserati’s incredible heroics!

For the passionate all terrain discoverers, Maserati has got an answer with the OFF ROAD mode that increases the ride height and sets the pace going for an enthusiastic tryst with the altered path away from the conventional setup.

Overall, the frontrunner model has it all to transform your expectations with its spitfire and remarkable performance and counting on its extraordinary on road dynamics, the tide definitely turns in favor of the legendary Italian brand for now. All very well said for Arjun Kapoor and his car.
Just as his conviction and honesty stands out in his performances and so does his car promises a life - long fruitful ownership experience.