It's difficult to define the craze car fanatics have for luxury cars. It would not be wrong to say that for them – Cars before bars. A single scratch on their four-wheeled baby could make their heart split into pieces. Well, it's worthless to say how obsessed they are for their exotic beauties and how heart-wrenching it is for them to leave their luxury drives alone even for an hour.

However, there still exist some people who are cruel and insensitive at heart and have left these knights in shining armors unattended for years to die. Sad but harsh truth it is! As the list proceeds, it may tense your eyebrows but keep yourself strong and let us warn you, if you are weak at heart don't even think of scrolling down further to go through the list of the luxury cars that were left to die in India. Built between 1965 and 1980, this royal chariot came with 2 options in the engine – one with a 6.2-litre V8 motor and the other with 6.75-litre V8 mill. As we all know, almost all the Rolls-Royce built till yet are still alive and running on road and the reason is simple – the life expectancy of a Rolls-Royce is far better than the babies from the other marques. But as we all know exceptions are always there and Rolls-Royce is no different. An owner decided to stop using his Rolls-Royce, which resulted in the abandonment of the car. It feels sad to see a Rolls-Royce dying like this, especially the vintage one. When it comes to a robust SUV, Range Rover is the name that appears in most of the minds and why not the brand has established a good reputation in the market with it hard work and quality products. However, not everyone is born perfect and Range Rover too falls in that category. The previous generation of Range Rover Sport had witnessed some reliability issues, which might have resulted in the disowning of this luxury drive by its owner. The reason is unclear why this Range Rover Sport is standing deserted in one of the Mumbai's police station but this is sure that it has been standing there for quite a long time now.

For the unversed, Range Rover Sport is the smaller product of the marque that is available in a wide variety of engine options, which range from 3.0-litre V6 diesel motor to a 5.0-litre supercharged V8 engine producing a maximum power of 500BHP. Right from the Badshah of Bollywood to the God of Cricket, BMW has many of its ardent fans who consider it to be the best ride available on the planet. But not everybody thinks the same and somewhere it hurts right at the centre of the heart. From the Chris Bangle's designed last generation of 7 Series, this luxury sedan, deserted in Maharashtra, has been battered badly for the reasons unknown. Available with the engine options of 730Li, 745 Li, 760Li and 730Ld, the 7 Series is one of the most purchased sedans from the Bavarian's portfolio. Rarest of the rare cars available in India, Lamborghini Countach is a legendary car that entered into the phase of production from 1974 to 1990 and since then it had won many hearts because of its sharp angular body and aggressive looks. It was a mid-engined sports car that drew its power from a naturally aspirated V12 engine. Any car enthusiast would dream of owning this beauty as now it will be counted as a vintage collection but somewhere in India this old vine is rusting in pieces. Available with rear wheel drive system, this Porsche's baby is popularly known as Type 964 where its removable roof made it one of the rarest collections among supercars that are no more in production. The model above is waiting for its owner in Goa since long to clear the custom duty levied on it.

Porsche Carrera 2 Turbo came with a 3.6-litre flat-6 cylinder engine that churned out a max power and torque of 247BHP and 310Nm, respectively. Once counted as the flagship model of Mercedes-Benz, this two-door roadster drew its name from the abbreviation of Sport Lightweight. The idea behind this beauty was to create a toned down version of a Grand Prix car. One of the most powerful roadsters of its era, this true-blue sportscar was energized by a 5.0-litre V8 petrol engine that delivered 302BHP of power. The car above is counting its last days somewhere in Chennai. The image above might break the heart of many car enthusiasts seeing the condition it is now in at one of the police stations of Delhi. The police seized the car when its owner rammed it into a pillar and wall after losing control on the beast. This two-seater convertible comes with Porsche's one of the best engines – 3.4-litre flat-6 cylinder motor. This powerful motor was able to transit a power of 326BHP and a torque of 360Nm. Ford has finally launched its one of the most popular cars in India – the mighty Mustang in all its new avatar. Though the vehicle has been available since long in the international automobile market, in India the car enthusiasts had to wait for a considerable long period of time to get their hands on this exotic beauty. But there were few car fanatics who imported this legendary car in India to prove their elegant taste and unique style statement. Well, seems like one of the imported Mustangs (shown above in the image) had an owner who didn't take the good care of the baby and left it to get rusted in its old age.

This is the Mustang in its older form counting its last days in Mumbai in open as no one cared to take care of this icon. An old Mustang is a very rare scene to witness in the current scenario and has attracted many vintage car collectors to try their luck on one. Another Rolls-Royce in the list! Though Rolls-Royces are built to last, few people don't invest their time in taking care of these babies. According to the data released by the company, around 65% of the Rolls-Royces are still alive on the roads. The above Rolls-Royce Phantom has been lying abandoned on the port of South India. Seeing the body of the beast, one cannot say that it is about to die unattended. 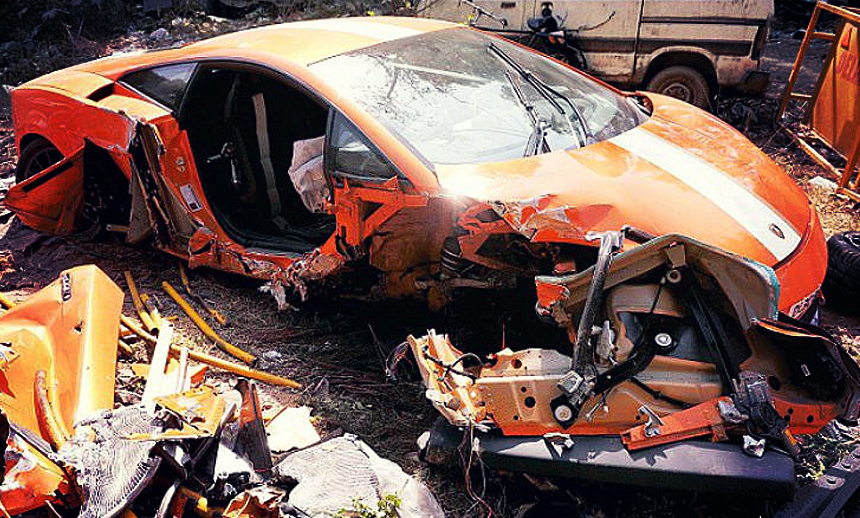 Your eyes might shed tears after knowing that this is the only Gallardo Balboni limited edition car in India and only a few are left throughout the world. This limited edition met its unfortunate destiny after meeting with an accident on the roads of Delhi. Since the day it met with its sad fate, its body has been lying down like this only and no one put in effort to make it come alive by repairing it. This rarest piece of art has been left to die!

Have you seen any such careless car owners in your vicinity? Click their cars' image and post it here to let the world know how brutal some humans can be!