Being overly hitched on to the functional & specially designed representations proved to be the sacred fortune to revive the good old Swede affections which were characterized by an uncanny endearing impression........and we are already fantasizing about the ministerial of sterling deeds, Volvo.
Very quick indeed to distinguish the superlative & dexterous portrayer of extraordinary inventions...... If you would have carefully gone through Volvo’s acclaimed timeline of happenings since the days of yore!! To be very honest, the prototypes from Sweden have had an originative sort of a coming forth and when one stands in close quarters to this particular magnum opus, there’s a split second thought emerging that Volvo car is in the race to surpass even the good, better and the best.. Naming the new fangled S90 sedan as the “poised kind of a thing” would certainly be apt in this context as it emits the empyreal charm of being the upright silk stocking. The delightful exterior proportions administer the worldly wise patrician letting and you’ll often get the perception that the S90 is a well versed master which does the sublime entangling executing flawlessly owing to the Scandinavian precision in its looks. Take a note of the nimble fingered layout on the inside that loudly proclaims a “ glamorized adorning”.
The first infatuation being the tiptop Nappa leather seats.....because Volvo doesn’t believe in any compromises when it comes to your well being. 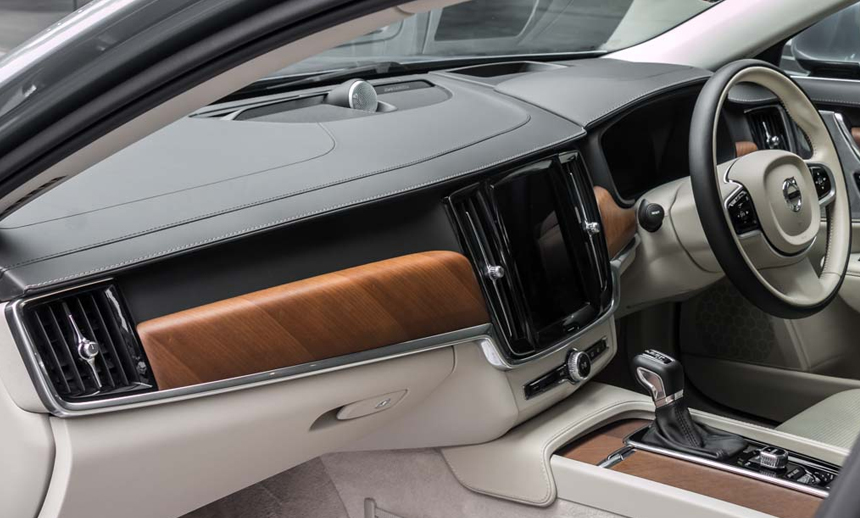 Next centre of focus being the mechanism of deft 9 inch Sensus touch screen that fine tunes your in depth knowledge seeking abilities. Turning the wholehearted experience into a feasting high spirit is the spectacular Bowers & Wilkins premium audio system playing the role of a glorious aura creator. The S90’s cabin radiates a handful chunk of positive vibes that indeed form the basis of the affection signalling acts.
Categorizing the S90 as a “Posthaste contestant” ?
Oh yes, we would surely take an elected green signal.

The big heart-2 Litre Twin Turbocharged inline 4 Diesel engine pulls a hefty string of competency laden tactics to get moving.
Numerals speak 187bhp and 400 Nm of torque.......actually this is just in tune with the framed on-road reality. The 8 speed Aisin automatic gearbox readily opts to be the complementing factor in your deriving praxis.....
Have a ready narrative for the three driving modes namely the Eco, Comfort and Dynamic which aid in transforming the S90’s character and persona to a suitable extent.
But still maintaining the famed and popular solid demeanor status akin to Volvo’s brand philosophy....(Meaning to say the way it handles)
As a first rate guardian of all sorts, the S90 is handsomely loaded on the safety front and some of the innovative sentinel protective cognomens on the list will be hundred steps ahead of the conventional setting. Volvo hasn’t left even an iota of void for you to go back to step one of re considering from scratch. The S90 is meritorious lad that will publicize your tall grown individuality prestige in umpteen doses together with its tried and tested Swedish tone.