For over 100 years, this automotive manufacturing company hailing from Britain has ruled the roost in the Luxury segment.

"A machine running on four wheels and leaving a supreme impression........ is surely a visual delight."

Since the very beginning, it has been a trademark symbol of prestige, status, respect and probably we will fall short of words to describe the brand and it being none other than the legendary Rolls Royce. The legendary signage you see here is a perfect embodiment of sophistication, panache and elegance!

The revered exhibitionistic logo on the bonnet which pops out meticulously has literally won accolades and appreciation all over the world, is known by the name of 'Spirit of Ecstasy'.

"It is in the form of an angel leaning forward with her arms outstretched behind and above her.

Adding the subtle touch is the billowing cloth running from her arms to the back, resembling wings as if ready for flight." The famed product portfolio of Rolls Royce offers a range that coerces one to take a second look and be head over heels with the stupendous beauties.

The mighty offerings from the royal British stable exude richness and splendor that is above all competition & set its own benchmarks & standards.

In India, we have a huge fan following for the Rolls Royce right from Bollywood Stars to Corporate Honchos who are literally in love with the lineage & history of the brand & cherish every moment when the car exemplifies authority and dominance on the road.

Critics are of the opinion that a Rolls Royce is always a perfect embodiment of the person owning it & conveys something unique about the personality of the owner along with literally being a life-long companion.

That's the beauty of a RR!

But have we introduced you to the new -fangled offering from Rolls Royce that is in for an exhaustive review today.

It is the classy and sleek looking Ghost that gives you the same bang for the buck as its elder sibling the Phantom. The Ghost surely melts hearts with its sophisticated and refined styling .

The renowned British Designers have carved out a retro & contemporary design while at the same time retained a sober & sophisticated look that goes very well with the brand philosophy.

Getting high on the handsomely adorned chrome radiator grille along with the classy rectangular architecture of the headlamps perhaps is the first crux for the mooning over on the English Castle on wheels. The classy side profile makes for an enormous and gigantic length that is indeed captivating for onlookers.

The XXL size wheels and the thought provoking rear reverse opening doors present an unusual look and we are pretty sure that folks at Rolls Royce have given a tough competition to the new age tech savvy luxury limousines and these historic touches enable the Ghost to carve out a niche for itself while portraying English culture and heritage at its best. The car is simply a head turner. The rear end too is very engaging to look as per modern standards courtesy the excellent paint finish and the charming chrome outlets for the exhausts.

A 7 Star Lounge on the Inside! The interiors of the Ghost look extremely welcoming and make the occupants feel regal and important. One of the best quality wood veneers, handcrafted superlative stitched leather and prepossessing dashes of chrome(see around...see around) around seclude you from the outside world completely.

It feels as if the gateways to eternity have opened in true sense. 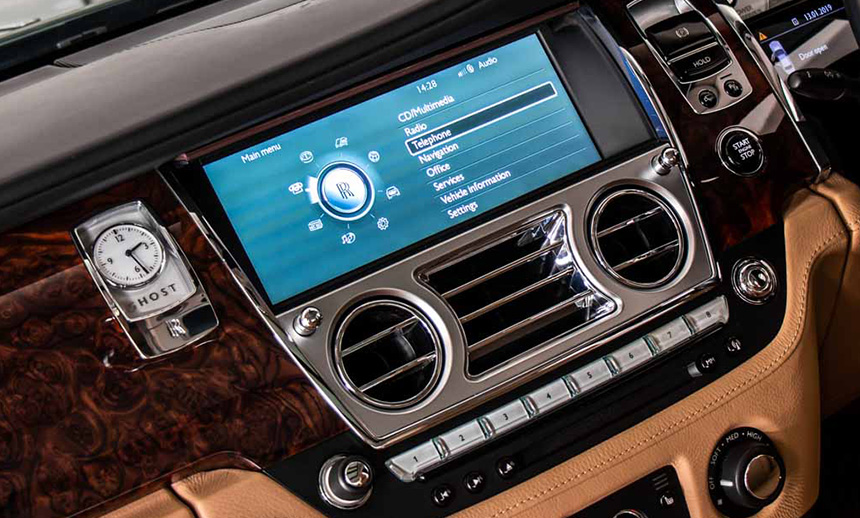 But what is more interesting and deserves mention is that the dashboard emanates the cultured techno wizard samplings that manages to bowl you over by its scintillating functioning and mechanism!

And here comes our matchmaking on the go practice.

The Display screen for toggling through the information for navigation & car mechatronics strongly bears a resemblance to the one found on the BMW 7 series.

An open invitation to show your extended caliber for mastering the homogeneous setup. And what the owners will definitely prefer after having a heavy day at the boardroom is to just relax & pamper themselves in the back seat along with a wine glass for company.

The humongous heart within! The Ghost sports a 563 bhp 6.6 L longitudinal twin turbo V12 driving the rear wheels via an eight-speed auto and....... a groovy air suspension with electronically adaptive damping. In our honest opinion that serves as an expected norm to cater to the notion of endless "one more in the list" seeking habitual personalties .

People may be intimidated by its sheer length on the outside but once inside the cabin and into the driver's seat, things become relatively easy. Maneuvering through bottleneck city traffic isn't much of a stress due to the watchdog sensors present on all the four corners of the car plus also the admiration and respect which the Rolls garners from commuters.

The 0-100 timing is roughly about 5 seconds which is in the sports car category but you don't realize it till the time you ogle at the instrument cluster.

The way with which the Ghost attains speeds of higher limits at the blink of an eye is simply incredible and leaves you speechless.

A car meant to cruise its passengers in sheer comfort doing some serious numbers also is an icing on the cake.

One doesn't expect it to impersonate a hightail presto stereotype but when the circumstantial day gig arrives, it can show off its potential pretty well largely due to the underpinning carryover effect from the BMW 7 series giving it added agility & competence to meet expectations. At the end of the day, the charm & elegance of a RR is simply unmatched. The company continues to enjoy an undisputed leadership & equity in terms of brand acceptance & liking amongst masses. Nothing surpasses the feeling to see it parked in your driveway but for now this emotion can surely be cherished at Big Boy Toyz.