“Grooving on its grandiose shades of discernment and magnificence, the much awaited evening’s state of surprise finally unfurled its covers to a majestic creation of expertise that was destined to carry the ‘focus of attention’ badge without equivocation.” Analogous to a stand at attention salutation and welcoming, the “cream of the crop” from Germany had us in a fascinated state with its twinkling and brightly lit LED lights when it graced the marvelous boulevard, flaunting its eternal winsomeness aplomb. The signage gleams with enthusiasm and pride while portraying the revered veneration for the historic timelines and it being all the more special when a Maybach tantalizes you no end with its supernatural endowments of winning your heart at the first instance. The affair’s certainly got more overwhelming!
We weren’t certainly expecting “over the top” fortunes of being so close to a major leagued example bearing the momentous three pointed star, but boy oh boy it did happen. Thanking our zodiac predictions once again. The divine and sublime proportions of the Maybach command a hefty admiration, with the artful design conception from the Germans slowly and steadily hovering over one’s senses in all honesty. The flagship ensnarls you in its glory of pride and prominence for good and you can’t help but own the fair haired machine for a lifetime.
It’s not a permanent full stop here. The indulgence has certainly reached its jelly junction for the extravagant takers.
More to unravel and unfold! Discover a prelude of unprecedented sophistication and class on opening the doors of the Maybach that pampers you with a super colossal dosage of regal and resplendent feel for that typical sovereign vibe. The one that proved to be the god’s gift to mankind, ah, the monarchial rear seats of the greatest inception is akin to a bed of roses with a host of creature comforts that bestows a ray of gratification along with propagating the good things in life will really make garner the heavenly feel onboard. Moving on!
The back bench of the three pointed star garnering noteworthy points.
Its steadfast functionality and mechanism is a voluptuous experience that legitimizes the fact in your sub- conscious mind that Maybach was built for only you and every encounter with the Deutsche example holds a great deal of significance for the moments to be cherished at a later date. Contentment has a new meaning with the cozy massaging feature energizing you all day long and a wish for creating a dream land of your own lets you pick amongst the 7 colors from the solacing ambient lighting which drastically transforms the appearance of the cabin.

Add to that the enticing Air Balance Package that regard fully does its bit to keep the cabin air fresh and stimulating along with offering a host of five different fragrances tailor made for your mood and preferences.
You’ll never be left complaining! The Burmester sound system with its crystal clear demeanor is an added feather in the cap and reaffirms the fact that Maybach has been conceived with the best possible extra bits to keep it away from any “Oh I wish that was there” phenomena.

Being intuitive since the very beginning was at the foreground of every Mercedes and the Maybach carries the tradition forward willingly for a quick rapport in the making. There’s everything to praise about the Command Online Display resolution which makes even a novice get a strong affiliation with the technicalities of toggling through. For the elegant Nappa Leather upholstery, an old chestnut is surely on the cards describing its peerless and unexcelled effort in making you feel all the more kingly.
“The Maybach truly qualifies to be a wonderland of miracles on the inside that gets the positive gesture of heads from the polished corporate honchos.”

How’s it from behind the wheel? Keeping a steady pace, the icon exudes a mark of suavity as the 4.7litre V8 Bi-turbo motor portrays a calm and composed nature for the nobility and urbanity affair discerningly.
That’s for starters.
Well that’s a well- accepted norm and practice to savor its fine experiential decorum for a magical tryst that communicates its exceptional intent of doing honors to a red carpet arrival.
Drive it to believe it!!!
The 9 G-Tronic transmission won’t exactly put you in the faultfinding zones courtesy its agile and brisk mannerisms of coming out on top each time you intend and wish to do something different with the Maybach.
Remarkable and unthinkable!
Exactly what?

The way it deals fastidiously with the tarmac undulations to award you a willowy and fictile ride is worth a thousand praises.
Of course, the AIRMATIC suspension has a host of cipherings and estimations up its sleeve in a bid to prove the thick skinned temperament of the Maybach with regard to the unwanted bumps and jolts on the move.

You’ll definitely enjoy the “promenade” exercising of the three pointed star when it floats startlingly in the Economy mode exuding it’s atypical symbol of being one of the gratifying shippers with due respect.

And when the longing and aspiration for a show stealer arises, the SPORT mode brings out the star performer for the energetic meanders to be carried out with a great vivacity and conviction.
The whiz kid steering is an enchantment in itself, the way it grants a magical spell for the fantasy rides you’ve always dreamt for! What do we conclude then at the end of it all? 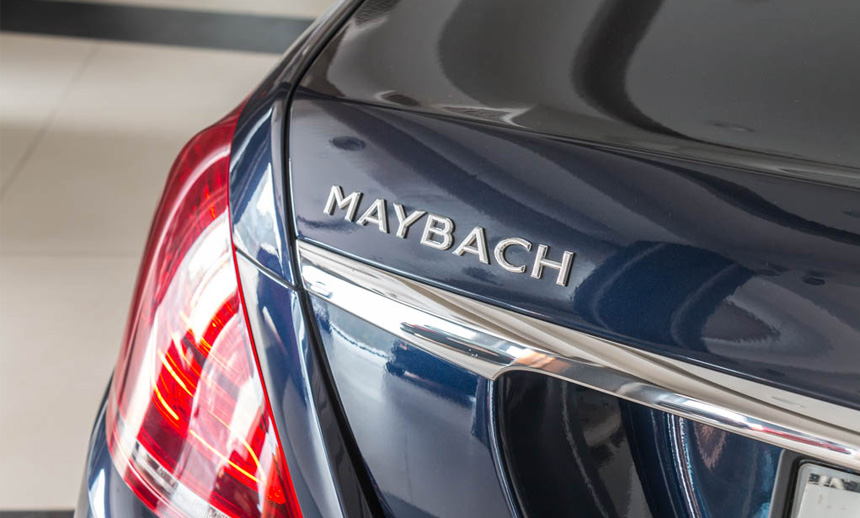 An astute invention that can proudly be crowned as a super colossal achievement, the Mercedes Maybach has got everything to wow you with its ostentatious scintillas and offerings which accentuates the buying consideration to an altogether different level.