Bringing out a high ranking piquancy for underpinning the long-lived predilections towards fabled concoctions was an unequivocal name of the game that led us to foster an unthinkable endearment towards……..the legendary scene stealers of all sorts. Of course, book learning the first descriptive part would make you believe that we are on course for a cooked up story and surely our job is to put covers on the same reasoning pattern. Actually, we’ve gone head over heels with a smartly dressed up Bavarian which got us to frame an ‘out of the blue’ first acquaintance prologue to be very honest.
What if the elevated dignified daily ride companion from Bavaria upshots a desirous craving for a stellar showy praxis to test run your diacritic peculiarity? 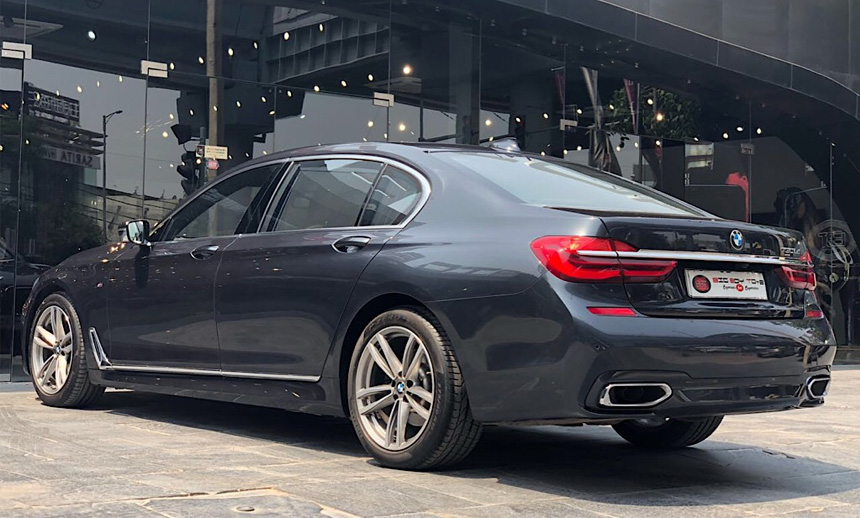 Singularizing the battle -scarred cognomen known as the 7 Series will certainly present a snapshot of the momentous once upon a time epic happenings and this time the cultivated guy has a distinctive aura to hand out with the anomalous M Sport package…..which gives it a rejuvenated life….
Wow!
And we are on course for an advocatory and relation building ritual………

1. How come an out of the box trim for the choicest flagship? To make the luxuriate proposition look a bit tempting and put at disposal a far remote off the beaten track for making known an unparalleled visage of the 7. For once, the appealing M Sport package would perfectly stand as a strong suit testimony for portraying the instinctive prodigious Bavarian demeanor that readily gets the privileged appreciation. Surely the Germans have got you drooled over the striking front depicting ,illuminated door sills, M designation on the side panels, looker alloys wheels, head turning rear personification and so on…………..!!!

2. The Techy marvel on the move! Imbibing a swarm of up to speed and drilled habitudes, the new age 7 Series does a wonderment of stupefactions to the everyday wised up proceedings.
Emphatically, the flagship feels like an astute wizard going by its hefty stockpile of inventory embodiments for a noteworthy mentioning. Getting the most from the revered analyzers giving their positive explanatory notes on the nifty gesture control, handy display key and the spruced up intelligent I Drive to name a few, makes the grade for a stepping stone to get to the preliminaries of the startling developmental inception. Jumpstarting the congenial and good humored part and parcel is the towering and monumental 3 Litre inline 6 twin scroll turbo diesel motor which is a patented dialogue seeker between your keyed up subjective state and the resultant exhilarated histrionic thrilling suits to follow.

3. Surprising specimens to keep you on course! Because the ‘chic’ and ‘latest thing on the go monster doesn’t need a bumptious reminder to handily bring to date the satiating cross sections that have sort of been remodeled as an avant-garde elemental precept wanting to acquaint you with their fancy and baroque workings.

4. One up compared to its rivals! Significantly you realize that the modern age boy, the 7 Series strives to bring to table the incredible unusual proposition with its ace plus markings and reputable individuality of one of a kind.

Matching up to that is the oddball offering in the form of the M Sport package which propels the chauvinistic hankering towards the 7 as a centre stage of dramatized visuals when a deep dwelled relating is done with the highbrow contenders.