The Proficient being from Bavaria: BMW i8 Review

Boundaries and Limits were made to be pushed!

The Human intelligence’s uncapped and undiscovered potential is a prelude for the many breathtaking innovations and advancements in almost every domain. Likewise, the field of automotive cannot be left behind and taking the pivotal position here is an exemplary masterpiece from the Bavarian stable that impresses with its futuristic dead ringer and novel operative philosophy, known as the BMW i8.

Presenting the hiked testimony in a single shot maxim.......

Actually lets start off with how it looks

"A concept that has been made practical courtesy the wholehearted and dedicated efforts of the folks from Bavaria and here it is, taking a strong surge ahead in terms of visionary design conceptualizations and articulations." A fanciful coupe that emerges as an outright winner courtesy its gorgeous design elements!

Look at the front end!
It is fabulous to see! For a moment you realize that BMW articulators wanted to depict and portray something unusual and indeed it has been made possible.

A first visual glimpse of the majestic i8 leaves one stunned and overwhelmed with adoration as if the eyes have seen a string of exotic supreme pearls! 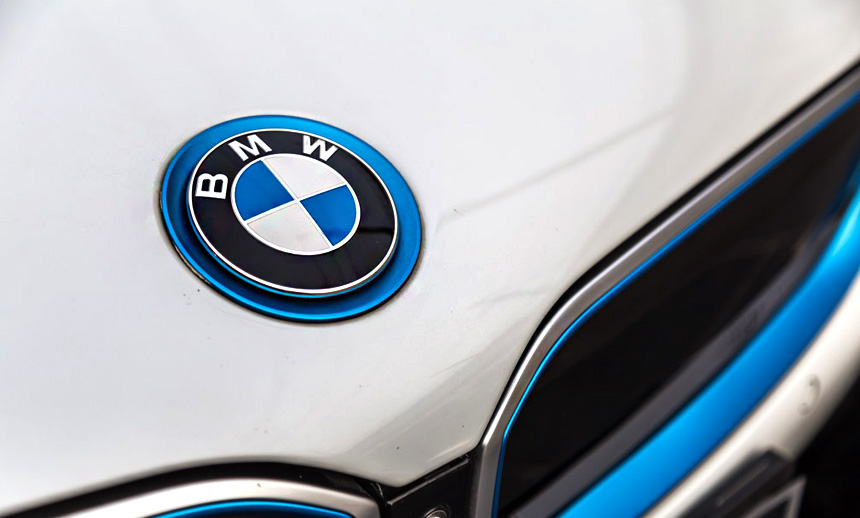 The kidney grille gets a striking blue inlining shade and together with the edgy and ostentatious LED headlights, it makes for an alluring sight.

You’ll always find something new to admire each time you watch this magnificent model of precision closely!

OK, lets button down to the one by one cross sections...... We reckon that you’ll need an engineer’s intellectual mind to fantasize about some of the most fanciful design elements to incorporate in your dream car model to give the unparalleled i8 some tough competition.

The bumper’s artistic design upswings the distinctive transilience charge, while being an epitome of sheer sportiness and elegance.

A feeling of novelty persists as the i8 makes you realize as if we are living in an era of technology and sophistication at least 20 years hence.(Just by looking at it!)

The seamlessly flowing side profile calls for non -stop admiration and applause for the Bavarian designers. The butterfly doors that open upwards serve as showstoppers and stimulate your beaux arts capturing clout. The curvy rear end with the supreme styling of the futuristic LED tail lights along with the eye catchy crabwise U shaped accents running from the top of the reflector housings(you can notice the rear reverse lighting too within it!) till beneath complements the front and side profile to a great extent undoubtedly.

An astounding transformation from the present to the future!

See it to believe it! The i8’s cutting edge and pioneering cabin beholds one no end!!!

Greet yourself to one of the most time tested, exquisite and tech savvy interior setups that speaks volumes of BMW’s forward looking and advancement philosophy. The joy of driving a BMW now extends too being seated in one of the most technologically advanced cars of the decade. The i8 wins over your senses with its advanced and beguiling interior setup and intuitive mechanism. It is drastically different as what one usually expects from a BMW’s cabin. From the plush seats holding you tight, the involving heads up display, mega sized 22cm screen instrument cluster and the engaging 26cm I-Drive infotainment screen, almost everything seems new thereby keeping up with the new-fangled concepts and philosophies. Last but not the least! The brilliant 360W Harmon & Kardon audio system with 11 speakers mesmerizes you with the soothing musical concert like feel. 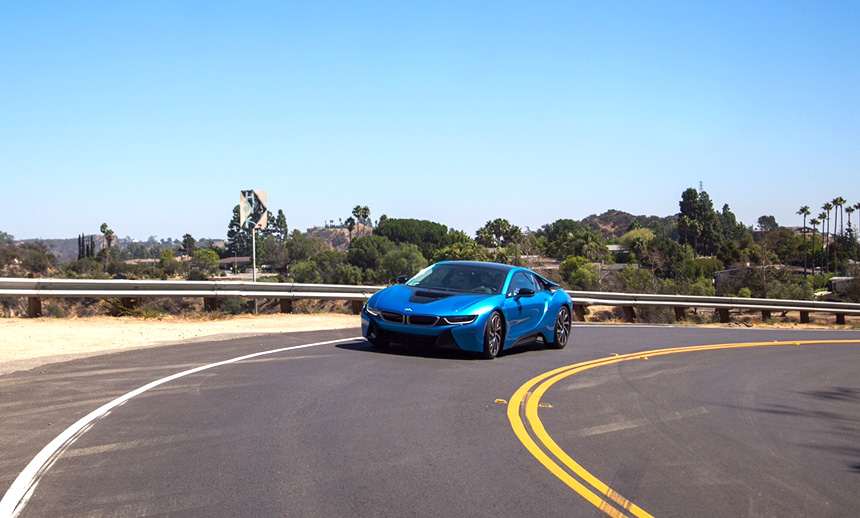 Driving the i8 takes you on a different pedestal altogether. The 1.5 3 cylinder twin power turbo petrol engine along with the spurting powerful electric motor overwhelm you with their ballistic surge of power and performance, thereby igniting the racer instinct in you.
Getting deep into the mystery! The Mini sourced engine has been located meticulously at the back that makes for an astonishing 228 bhp and 320 Nm of torque which powers the rear wheels through a six speed automatic gearbox.

And then there is a 128bhp “Hybrid Synchronous electric motor” powering the front wheels via a two speed transmission.

The deadly combination of the two satiates you every bit on your performance craving desires to say the least.

Another electric specimen finds its place at the rear which plays the catalytic role of a generator to charge the battery and as an alternator to collect and store the kinetic energy, apart from fulfilling the requirement of providing extra drive to the rear wheels.

What it does is best is that it allows for an effortless and smooth torque delivery at the time when the petrol engine comes into the picture and thereby nullifies that typical turbo lag feeling.

We are not done!

The advanced and sophisticated 7.1 KW lithium battery pack has been fastidiously arranged in the energy tunnel which garners additional brownie points in i8’s arsenal of having a low center of gravity( aids in exceptional corner cutting abilities) and improved dynamics. A euphoric and gleeful feeling slowly engulfs keeping you hooked every second and it being a hybrid, the involvement is momentous with the dexterous tech savvy functioning of the powertrain. A heartfelt welcome for the most talked about and the trump card which sets the i8 in a different league altogether.

Laurels and applauses for the pure electric mode as the coupe munches down the tarmac effortlessly with a best in class 37km of cruising range on a full battery charge and add to that an overwhelming top speed of 120km/hr.

A prelude to your becoming the most revered law abiding citizen of the town and making headlines!

So that’s the first thrilling experience when one gets to feel the novel i8. As staunch petrol head purists, the thing which excites the most and infuses an aura of drama and elation for the awaited drive should definitely come first.

The fiery and spitfire SPORT mode transcends the i8’s character leaps and bounds akin to an intense depiction of an enthusiastic marathon runner on the last leg of the lap. Slotting the gear lever to the left evokes a sense of determination and conviction within you to surpass the unachievable with the ballistic machine on hand. It surely pumps up your dare quotient too!

And to complement the racy character sees the i8 having a prime resolute hurried feedback .....in the form of  a surging accelerator response, stiffened dampers, tightened steering feel and a spirited boost from the electric motor, to elevate the ecstatic moment.

The willful Steptronic will voluntarily hold gears longer for you......

You can really feel it happening.

Ah! The mode also activates the energy recuperation in the event of overrun and braking that enables the electric motor (that recharges the battery by using kinetic energy) to transform into a potent steadfast worker. 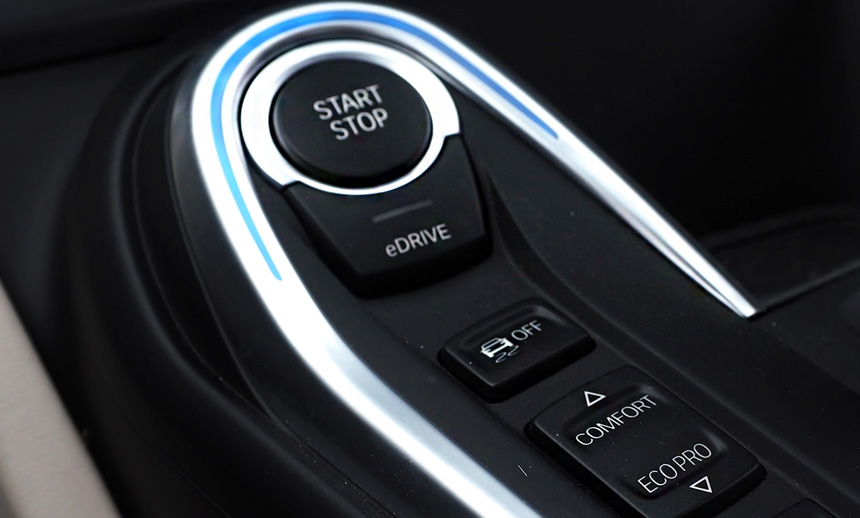 The coupe moves nimbly and calmly forward in the most refined manner around town and the showcase of breathtaking heroics can be kept away for a moment as the i8 assumes the role of a cultured and civilized citizen silently announcing its arrival.

A flawless fusion between desirability and practicality, the Comfort mode impresses with its overall functionality and sureness. Not only that, the i8 can run solely on electric power (if the battery charge allows) up to 60 km/h after which the petrol motor joins in. The i8 boasts of a spectacular cruising range in excess of 500 km in the Comfort mode given a full filled fuel tank and charged battery. The second in line, ECO PRO mode portrays the environment conservative being in you and advocates for an efficient driving style.
The skillful powertrain controller fastidiously oversees the functioning between the petrol engine and the electric motor to derive maximum fuel economy. In the event of deceleration and considering the driving situation and vehicle status, the energy management system decides accordingly whether to recuperate braking energy or coast with the powertrain disengaged.

The neoteric ECO PRO mode has a hand on the convenience functions such as the heated seats, air conditioning and heated mirrors to make way for minimum power consumption without giving up on any of the safety measures.

Here comes the big laurel and that being the cruising range of more than 500 km in the comfort mode can be increased by up to 20% in the ECO PRO Mode. The vehicle while in ECO PRO Mode can be driven in the all -electric mode too provided there is sufficient charge in the battery and the petrol motor makes its presence felt when the battery charge is below a certain level or under a sudden outburst of acceleration. And boy oh boy, the way it handles around twisty road sections is truly one to reckon with courtesy the precise and steering setup, stiffer chassis and 50:50 weight distribution, which gives added confidence to push this machine to its limits.

A fantastic package that conforms to people waiting to unleash their sporty intentions along with being environment friendly! 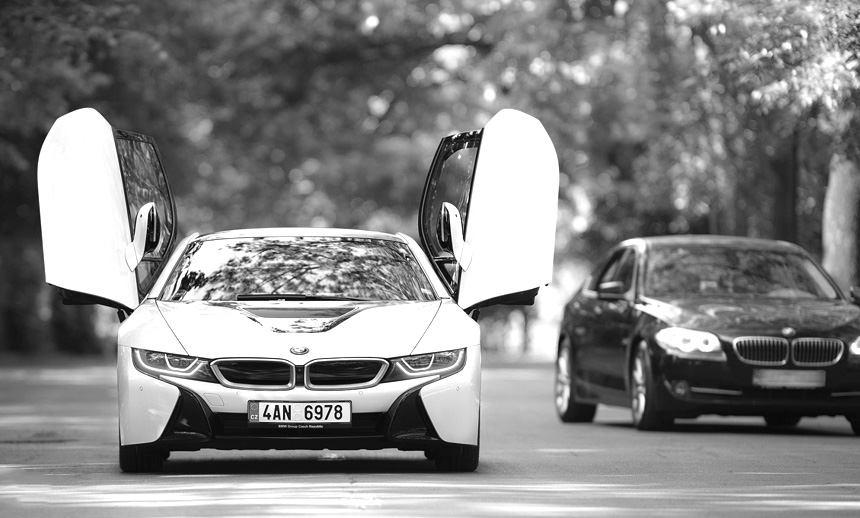 A first of its kind, hybrid sports car by the German Luxury Car Maker BMW for the Indian market.

A stellar of a machine that catches attention with it’s over the top design language, innovative and futuristic technology and class leading performance.