The Grand Ticketing in Saif's Garage

Proudly crowned as the tenth ‘Nawab of Pataudi’ along with being sanctified with exceptional acting skills, Saif Ali Khan is one of the impressive and august figures of the Indian Bollywood Industry who has seen a stint of unparalleled fame and recognition for his genre of work.

A multi- faceted actor, he has proved his dexterity and talent in a variety of roles that has made him a legend. Saif has surely imbibed a host of fine traits from his father, Late Mansoor Ali Khan Pataudi, that makes him a distinguished persona when it comes to living life king size. The Khans truly know how to do it in style! It wouldn’t have been a surprise if you happened to glance through the Google news online a few days ago only to discover that Saif recently brought home the king of SUVs, the grand Jeep Cherokee SRT, which caught the attention of many while proudly holding the ‘viral’ tag to its name.

And wait a second, here comes the twist in the tale!
Recent reports are of the opinion that the Grand Cherokee bears the registration name of Fiat India. So what does this mean?
Has Jeep India gifted the SRT to Saif in a bid to accentuate the brand’s publicity?
The speculations will be on for sure.
Nevertheless, a smart PR gimmick by the company who looks to make aplenty as Saif gets a hearty experience of the gargantuan beast. To add to the extra bit of excitement, his latest fancied four wheel shares the extravagant garage with the likes of an Audi R8 Spyder, BMW 7 Series, Lexus 470 and a customized Ford Mustang. From the ever popular Germans and the Japanese to the mighty Americans, the talented actor’s car collection epitomizes unprecedented intensity with a high degree of gaiety and elation, every time a machine is put to its paces. 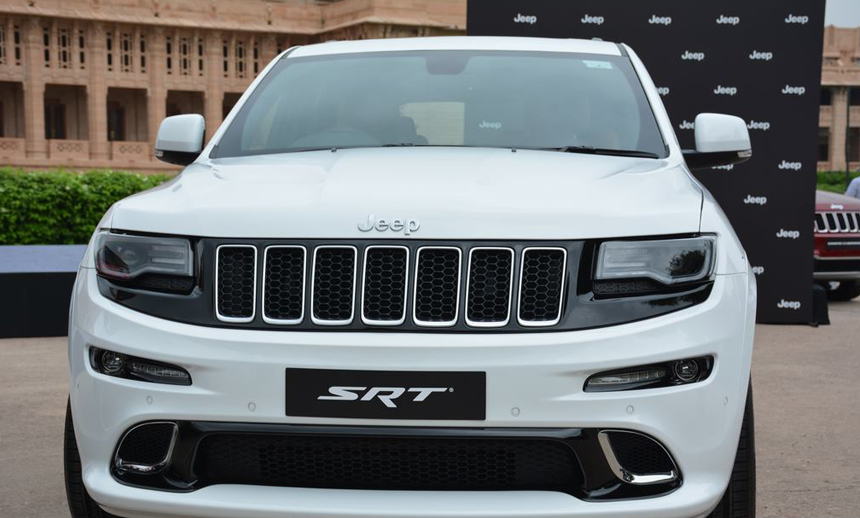 One look at the mammoth Grand Cherokee SRT is enough to convey its “give me way” intentions as the generous dose of elephantine proportions work extremely well to have a dwarfing effect on anything that comes in its way.
Mighty, impressive and extraordinary, the words doing honors to the attention craving machine along with an exclamation mark to follow.
A dazzled expression on your face follows that reads…..
There’s a new American boy doing rounds in the town!

The muscular and well chiseled front end with the stylishly and thoughtful seven rectangular slats for the grille makes for a purposeful and determined stance, with the glittery & ostentatious LED daytime running lights accentuating the oomph factor. Its intimidating presence is further revealed on admiring the majestic side profile with a special mention of the striking 20 inch polished 5 spoke Goliath wheels that elevate the sporty appeal of the Grand Cherokee. Even the rear view is a clear cut treat for the exotic car spotters for they have something unusual and exquisite to capture courtesy the bright sparkling Jeep badge above the number plate and the thrilling dual exhaust pipes in action embedded flawlessly in the rear diffuser. The exteriors truly mesmerize you no end and taking you further to an all new level are the heavenly and inviting interiors of the Grand Cherokee waiting your arrival which in righteous terms can be compared to an extra-large barbeque pizza affair to drool on. To begin with, the exceptionally well snugging perforated leather front seats cosset one in extreme comfort and pampering you a bit further is their ventilated and heated mechanism which is a sheer indulgence. Getting a feel of the ingenious U connect 8.4 inch touchscreen gratifies you further as a host of information related to navigation control, apps, media and climate control can be altered and modified in the most intuitive manner.
There’s no denying the fact that folks at Jeep have catered for a felicitous flat bottomed steering that wants to be tamed all day long. It exudes the feeling that the Grand Cherokee has been your companion for quite some time and this probably not being the first instance that you are driving such a towering vehicle. The homelike attributes from the wheel make things easy for you quite a bit! 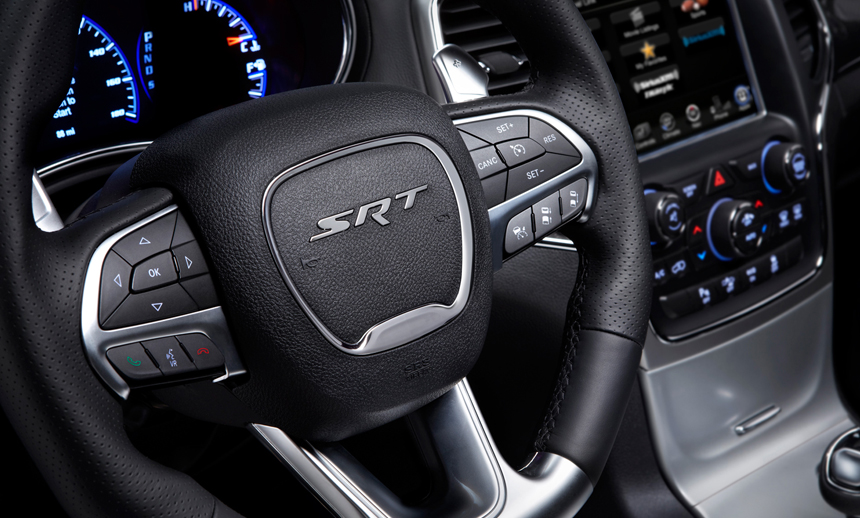 Equipped for a telescopic and tilt adjustment by the use of a lever button, the steering wheel further incorporates functionalities for hands free voice command control, cruise control and of course the famed and popular fun deriving paddle shifters. The rear passengers get their own share of satiation with the privilege of heated seats and two 9 inch screens mounted meticulously on the front seat backs.

From the enjoyable video games to playing one of your favorite DVDs and blue ray discs, the rear cabin experience of the Grand Cherokee deserves every bit of praises and adorations aplenty. Spicing up things further is the miraculous Harmon & Kardon sound system with 19 speakers that truly transcends the aura to an all new level. Kudos to Jeep for such a lavish setup on the inside!
Now here comes the real pleasure. An enthusiastic press on the start/stop button awakens the beastly hulk like entity, the omnipotent 6.4litre HEMI V8 that belts out an astonishing 475HP and 637 Nm of torque with sheer efficacy. The scintillating growl from the exhausts quickly leads you to believe that this motor is accustomed to try every bit of fancy stuff to carve a niche for itself in the heart of hearts!

And the way the behemoth monster leaps ahead with a dash of urgency champions its sole vitality and get-up-and-go character, coaxing you to involve yourself in short spurts of the frenzied unimaginable on the run.
The naturally aspirated motor surely knows how to discharge a deluge of hysteric reactions with its unshackling power from the very beginning that propels the Grand Cherokee from naught to 100 in under 5 seconds.
Get a stopwatch to try it over again and again! The 8 speed ZF box in question can’t be kept out of the frame as it makes you cherish the pleasurable seconds of involvement courtesy the intelligent and dexterous gear movement patterns which becomes an impetus for non- stop admiration.
Let loose the Grand Cherokee SRT’s zippy and brisk tactics by….come again….by activating the launch control which unleashes its overwhelming zealous personality.
Merrymaking then!
It’s definitely not akin to complicated physics terminology.
Instead you need to follow these short simple steps in pursuit for a blissful and contented moment with the Grand Cherokee.

Engage the launch control by pressing its button with determination!
Keep the steering straight and thrust your feet on the brake and accelerator and following on significantly lift up your left foot to see the giant’s spectacular run ahead.
More on your way with the Selec-Trac that features an array of driving modes namely auto, track, sport, snow and tow to be precise! Its feels as if heavens have descended on Earth when the massive Grand Cherokee responds with phenomenal agility and sharpness around bends and tight corners courtesy the catalytic Track mode. With 70% of the power being apportioned to the rear wheels, joy knows no bounds as one gets to experience the true thrill of an unadulterated rear wheel drive experience full of movers and shakers in the Grand Cherokee.
The next in line being the vigorous sport mode that enlivens the child in you for a frenetic drive as the suspension suitably firms up and transmission shifts are modified to match the high engine revs along with a partial ESC intervention if desired so!
Praises for the Auto mode galore as it retunes the mighty Grand Cherokee to exude its camouflaged intent by adapting earnestly to the given conditions! (Because it has to keep the big brawny boy in your good books)
The addition being that that the Grand Cherokee SRT unpretentiously caters for those satin jaunts (It has to!)
The least aggressive of the lot being the snow mode where the torque split is 50/50 together with a reassuring effect on the slippery roads by a significant increase in vehicle stability and reduction in oversteer. Tow mode exhibits the same torque split as the Snow mode while enabling you to carry your hefty trailer along with the Grand Cherokee for those fanciful long road trips. Interesting, isn’t it?

What really takes the crown is the ready to conform Bilstein adaptive damping suspension regulated by the Selec-Trac that makes way for the desired joyrides on board.
You’ll definitely not be left complaining here as the stupendous compliant dynamics leave you in a spellbound state.

The complementing factors now make their arrival. Well we should have mentioned them before only.
The supportive Quadra –Trac mechanism meticulously distributes torque between the front and rear axles (depending on the mode engaged on the Selec-Trac), so as to offer a flawless balance of sportiness and comfort.
And with the Electronic limited slip differential for the rear, apprehensions for a wheel slip can surely be negated to the fullest as it caters for 100% of the torque to be sent to any one of the rear wheels on detecting the same.

So the vigilante group is always geared up to tackle any forebodings!!

The way the Grand Cherokee sheds its splendid high speed runs to come to a standstill is noteworthy with the credit going to the ever famous Brembo brakes that do their share of bit in a steadfast manner. The enormous Jeep has everything attached to it that makes it a possession worth owning along with offering you every bang for your buck, the notion being popularized by the company in a “Grand” manner.