Porsche 718 Cayman: The one breakneck soul

“Doling out a keen witted self perhaps was the perfect shot- gun for the dovetails with a fancy tiptoping and zippy ‘straight stuff’ that readily appeals to jubilant being within.”

A time to complement the illustrious drawing boards which continue to goose the eggheads and this time it presents a new fashioned entity that….that advocates itself as the proud “playboy” in the exotic garages of the renowned entrepreneurs!!! Fascinating narrations, thought provoking stories and captivating exclamations aplenty, the short statured guy from Stuttgart plays the anchor person for evoking the typical hysterical reactions, ah!, when you get a hearty rendezvous with the sensuous Porsche 718 Cayman. Portraying one’s pleasure seeking attributes, the tickle pinked coupe has a strong say in your exploration for the first-string and well-made genre of possessions. Well, if it has the herculean Porsche backing in high spirits, then you don’t have to bother much! That’s the best takeaway for the day!
A subtle epitome of sportiness aplenty for the big time capitalist and industrialists who have a trump hand of showcasing yet another “case in the point” of falling prey to a whimsical Porsche alongside their continued affections for the well-bred and street wise flagships!!!
For the grey haired it comes across as possessing a certain amount of being around aspects (thinking familiarity) for their ecstatic weekenders and expeditions while for the whippersnappers it is just another reason to sharpen their knack of double quicks in abundance. Staring at it’s true to the life design language is akin to getting oneself entangled in heaps of startles and you’ll definitely award it the sole singular tag for doing justice to your typical “eat one’s heart out” motility.
The 718 Cayman is like a young companion vivifying the momentous junctures of encounters with its high-faluting and glittery bits that quickly enables you to try a first hand for being “A one ace paparazzi”!

And going by the tempting demeanor of the gorgeous creation, we are pretty sure that you must be in the process to reframe the three winks to a complete picture of the topflight performer in motion…!!!
Oodles of sporty character on course, the triumphant Porsche with its eye popping exteriors gets a lofty crown of being the ‘esteemed wished for’ in the handpicked neck of the woods.
Carrying on the essence and flavor of being a high flown sort, the Cayman nudges ahead with a lavish and ritzy proposition…because it has to harmonize with the top-hole P standards of all time.

That is one side of the coin!
The other being is that it propagates its unrivaled distinction by hosting the empirical and functional shades of practicality! Yeah man. There’s a sure shot penchant for the beckoning functionality, the informative Porsche Communication Management and the well snugging seats as the flamboyant 718 Cayman very promptly showcases an unparalleled “gregarious person” peculiarity.

Welcoming, welcoming!
The reiterating tunes are on!
The one up in Cayman’s bag of treasure to sanction a definite yes for all the awe inspiring smidgens that do their share of influencing!
And you realize……
You get entangled in a relationship that dwells and bestows a new meaning and purpose, the feeling for which is truly unmatched!
There’s a back slapping & convivial delectation for the one & only muscular 2Litre turbocharged petrol motor that promises an augmented dose of outrights & no holds barred.

Even the sweet hearted & buddy-buddy dabs on the throttle will evoke the 718 to “let the cat out of the bag” for a rapturous gushing and outpouring of the inherent wherewithal and that’s because the 300 horses are on their communicative intent from the very beginning. The marvelous exhaust sound adds its two bits with an ear splitting bent…wow!

Reaching to the top, of course, the go-go nature of the engine is pretty evident when it paves the way for the effortless best shots to reach the redline….for a self- laudation of the do one’s best. Porsche has opted for the tried & tested 7 speed PDK in this one that appeals without a doubt due to its….on the go particularity.

So an outright corner carver!
Without a fail!

The well behaved steering has an obedient birthmark for the entertaining trysts with the Cayman!
You’ll surely erect a different tailormade storyline for the mode switch as it generously caters for those chilling and cliff hanging happenings when you are in the full mood to go a bit theatrical.
A high five for the exceptional gripping and body roll control level the roadster possesses! 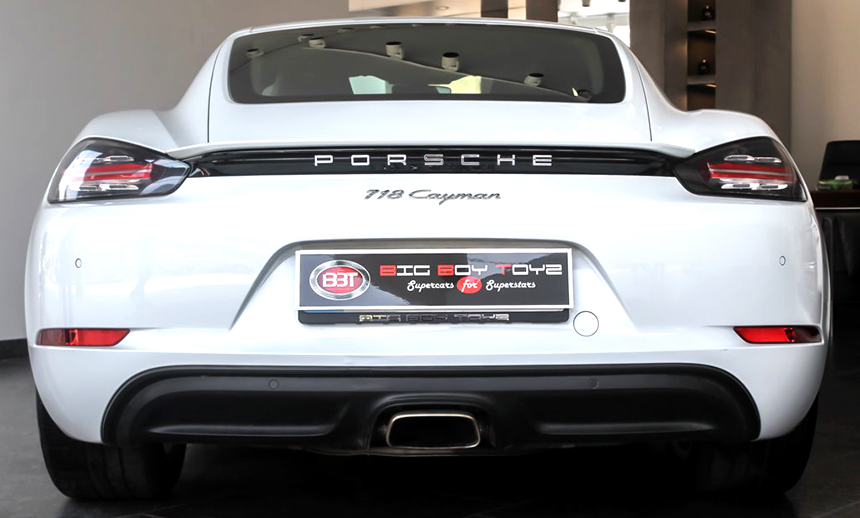 The 718 Cayman comes across as a tempting hundred proof offering from Porsche’s stable which unanimously gets the positive gesture of the heads for its host of compelling reasons and…. and the major one being that it is presently being subjected to a full blown publicity for its rarity at Big Boy Toyz, the dream land of super exotic cars.