Karan Johar, popularly known as KJO, is the ace director of Bollywood with loads of finesse, panache and elan. Acclaimed to be the most successful director till date he is also a scriptwriter, producer, costume designer and a reality TV show judge. Blessed with the flair of making melo –dramas which have been runaway hits, he has been conferred with a flurry of Film awards. His sartorial style speaks volumes of his demeanor and carriage which also extends to his choice of cars. So grab a cup of hot coffee and let us know more about his choicest four wheel possession. Standing the test of times and perhaps one of the oldest luxury automotive brands, Maybach is revered with producing some of the finest luxury sedans since a long stretched epoch.

What really turns the table??

The influencing spell of sway by the three pointed star brand, Mercedes Benz has conformed upon it an undisputed supremacy and dominance for it is now regarded as the ultimate choice in terms of luxury, comfort and performance. 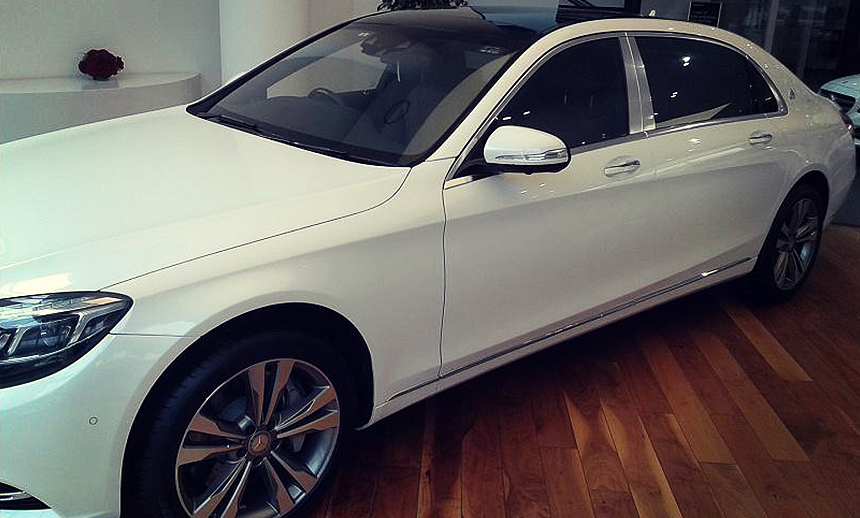 The tag for the best car in the world held by Mercedes S Class is elevated to another exciting level when one comes face to face with the bigger, brawny and muscular S 500 Maybach.

An S class on steroids, it is one of the fancied preference of the Bollywood Stars and is an integral part of Karan Johar’s exotic garage.

Owning a Maybach is truly gratifying and reminds you of the hard work and dedication that one undergoes to reach this level. The exterior fascia gives an appearance of an S Class but trained eyes will be able to spot the fine differences. The double slat chrome finished radiator grille upfront with the gorgeous arc inscribed LED daytime driving lamps give a reminiscence of an extravagant business saloon that leaves a lasting impression. The intricate detailing on the 19 inch alloy wheels beckons you to go closer and admire it to the fullest. Although the design tends to appear a little old school but complements the overall length of the car perfectly. The B pillar gets a healthy dose of chrome inscription and the paint work on this beast is absolutely top notch and faultless. The dual rectangular shaped exhausts take the centre stage with their aural bliss when the car is in motion. The lighted inscriptions are almost similar in shape to the S Class but look more charming and alluring on the Maybach (it has too!). The rear reflectors beneath, are joined by an exquisite and skillful chrome lining. Pamper yourself to one of the most beguiling setup of interiors that will leave you speechless. From the fine touches on the Nappa Leather seats to the massaging function and the crystal clear sound from the high end Burmester 3D audio system, everything seems a notch above the competition. The goodies of the rear seats with their meticulous mechanism are surely to be experienced once in a lifetime. The monstrous 4.7 V8 biturbo motor with its 455bhp and 700Nm of torque eliminates all apprehensions and once on the move, a person gets to experience the silky smooth nature of this engine along with the brutal power delivery. The new 9G-tronic gearbox understands your intentions extremely well and indeed rises up to all occasions.

The Maybach, at the end of the day, being a luxo-barge is a perfect epitome of finesse and style statement and especially for Karan Johar is the pick of the lot to attend celebrity parties and big time media events. One of the most historic automotive brand that represents the famed British heritage and legacy, the ‘leaping cat’ known as Jaguar has been credited to influence the entire automotive arena with its brand philosophy of relentless pursuit of excellence. From producing some of the most classic and time tested designs, the British brand has come a long way to manufacturing new age designs and ostentatious vehicles, thereby going well with the modern crowd. The one sedan that really takes the crown in terms of sheer looks and size along with leaving the onlookers mesmerized is the flagship saloon from Jaguar, the XJL.

The Bollywood has had a successful stint with Jaguar and the humongous sedan has always ruled the roost when it comes to procuring any exotic from the British stable. The exterior, with the flamboyant touches completely enamors you and one can’t surely miss the big and wide front radiator grille that takes the limelight with its menacing stance.

The 19 inch Toba wheels add a touch of sportiness and the ever alluring silhouette appearance is one of the striking elements that help to charter its own distinctive identity.

The sloping roofline at the rear translates into a coupe like design and blends well with a picturesque landscape behind. Greet yourself to one of the most magnificent and hi tech interiors of all times having a unique charm of its own. As one spends more time in the cabin of the XJL, he begins to reckon himself with the neat regal touches all around.

The beauty of the Jaguar Drive Selector that rises upwards on starting the car to the well cushioned and bolstered business class seats, almost everything has been crafted with extreme care leaving no room for error.

The matchmaker 3Litre V6 Diesel engine belts out 275bhp of unreserved power to make a merry of the enthusiastic snowball runs.

The instant surge leaves a big smile on your face and never disappoints you.

Indeed the Jaguar XJL is an icon of all sorts with the features on offer along with offering stupendous performance and therefore becomes Karan’s sought after possession in his garage. A quick rapid fire for you to decide which car you like the best. So this is about one of our famous directors and his grand car collection. We hope you enjoyed reading it as much as we enjoyed writing it.