Bollywood stars completely rule the roost when it comes to showing off their acting skills & potential in a big way.

This is one of the main reasons & catalytic forces for their avid huge fan following across the country.

Whether it is one’s precise body movements during dancing or an error free execution of an action packed sequel, almost everything counts during the long run & identifies the talked celebrity with the public.

These specifications go very well on screen but a sneak peek into the personal life of a superstar can also reveal many things as to why the crowd goes jaw dropping on the grand arriving in style.

Making a rock solid debut in the movie ‘Kaho Naa Pyaar Hai’ that went on to be a Bollywood blockbuster was a major listed happening in this actor's timeline........

Besides having one of the best contoured & chiseled bodies, Hrithik Roshan has the ability to be versatile & dynamic in his approach among many characters he has played in his movies thereby giving a tough competition to the well- established Khans.

But can it be possible that such a dashing superstar who skips the heart to beat can only win accolades & appreciation based solely on his looks & expression & nothing else?

Bollywood Town is one of the biggest lovers of exotic cars & Hrithik too has some hot machines in his extravagant garage.

Media is of the opinion that due to the actor’s back problem, he is often found taking 2-3 cars on the shooting sets so as to give him different postures for sitting that are not painful. When you‘ve worked hard all your life, then pampering yourself to the fullest is not a bad thing & that is represented by his supercar collection.

The charm & elegance of the ‘British Palace on Wheels’ is a perfect epitome of the English culture & heritage. It is a perfect machine that goes aptly with a superstar’s personality & success.

The Ghost boasts of a 563bhp 6592cc twin turbo V12 engine with a 0-100kmph timing of 5 seconds approximately & that’s literally in the sports car category.

But there cannot be any better & special occasion other than one’s birthday to swivel around the beauty & aura of the ‘Spirit of Ecstasy’ signage along with making it your priced possession lifelong. Hrithik on his 42nd birthday, gifted himself the latest iteration of the Rolls-Royce Ghost in a striking blue shade by paying a whopping Rs. 7 Crore & became the latest superstar to enter the list of renowned achievers owning this masterpiece. This vehicle stays true to the tagline of the company ‘the best or nothing’ and again conforming well with the decision making capabilities of the superstar.

If one has to choose the first rate or ultimate, then it has to be a three pointed star for sure.

It’s been the obvious choice for corporate honchos & world leaders from the very beginning & even our Bollywood stars cannot help but get mesmerized by the legendary badge value of an S-Class.

This magnificent example from the Stuttgart manufacturer is a perfect embodiment of timeless design, innovation, safety, status & reckoning with the fact that it looks a bit understated compared to its flamboyant rivals, it still is a clear cut preference for many buyers.

The example owned by Hrithik is a W222 S500 model sporting a massive 4.7-litre V8 petrol engine producing 463bhp with an earth shattering 700Nm of torque & capable of breaking some serious records.

The actor decided to go for this flagship model because while driving his father’s Mercedes-Benz, he unluckily met with an accident and came out unhurt, all thanks to the tried & tested safety features that stood gurdian. At last going by the company’s symbol, it conveys a whole hearted drive towards universal motorization & domination, thereby giving a strong reflection of highly successful people. Ever dreamt of burning some rubber & generating smoke? We are pretty sure that you would definitely like to if you encounter this classic Italian sportster for a few hours that will leave you spellbound.

The exhaust note will ignite one’s inner senses & enthusiasm to unleash the mighty raring surge within.

The design language is simply unmistakably a Ferrari & engages you even further to appreciate its curvaceous body & the low stance.

It is ludicrously quick but for media journalists & critics, keeping in mind its design language & performance abilities, it qualifies as the perfect example to be Schumacher’s weekender getaway car. This being the same car which Hrithik is found to be driving in his debut film ‘Kaho Naa Pyaar Hai’ & subsequently made it an inevitable part of his exotic collection due to the fun & craze factor. 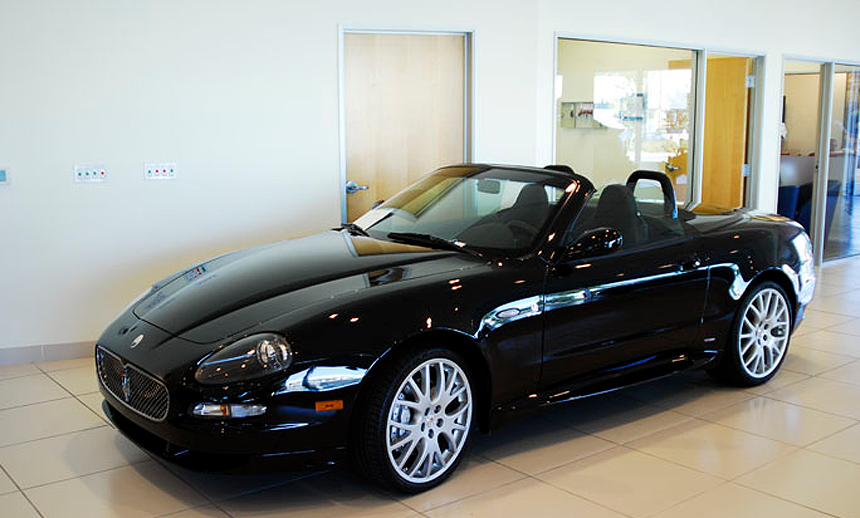 We’ve always been huge fans of that big wide elliptical shaped chrome grille that houses one of the world’s most respected & honored logos.

The Maserati's Trident signage with the three upward pointed spears convey a deep meaning & significance of the city Bologna where the great inception took place.

It definitely doesn’t get better than this, having your favorite Maserati with an open roof top convertible form that oozes dynamism & sportiness.

Its the sporty Maserati Spyder!!!!

These timeless pieces from Italy have always been praised for their singular poise & this being no different.

Equipped with a 4244cc engine churning out 390PS of unadulterated power & fulfilling the honors of an energetic showdown, the Spyder automatically regained a raring to go image in the enthusiast’s minds.

One of Hrithik's regal and time honored exotics!!!

Later on, the Spyder went on to became the Gran Turismo exemplifying class & elegance as a perfectRoman Maestro is expected to do. On hearing the name Porsche, only one thing comes to mind & that being ‘There is no substitute’.

This has been portrayed in almost every startling model of their lineup.

Cayenne being one model from the German manufacturer can be regarded as an entry for people into the Porsche lineage along with being a portrayer of one of the best in class design, performance, quality & unmatched ownership experience.

The Turbo variant, being vastly different from the run-of-the-mill Cayenne variants, simply engages one to go hard at the pedal. It will surely put a big smile on your face.

At the same, it is a fusion of dynamic sportiness & practicality, intending to say that one can drive it effortlessly in the midst of bumper-to-bumper traffic, while at the same time exhibit all its potential on an open stretch.

Its mere presence & revving note simply outclasses the rivals to a great extent because at the end of the day a Porsche is simply irresistible & therefore becomes Hrithik’s foremost pick for his daily commute. Think & perceive luxury SUVs & Range Rover Sport is the first name that comes to heart rather than mind. It is highly acclaimed worldwide for its tank-like build quality & luxury that are meant to pamper the occupants in extreme comfort.

Taking on any rough terrain is like a child’s play for the big daddy due to the unfaltering Terrain Response System .

It does tend to look bland with a simple design language compared to rivals but when it comes to performance, the RR does not fail to impress.

Surely buying a vehicle of this cadre & class will make you jaw dropped with its legendary status, prestige & the tag of being used by powerful world leaders & diplomats.

Hrithik owns this one too & therefore it justifies his love & craze for big & brawny SUVs.

Hard work, dedication, relentless pursuit & passion do pay off one day but people have to go through testing times to prove their caliber & worth. Hrithik is of the opinion that life is not a bed of roses & struggle at every step keeps one focused towards the ultimate path.