The peppy, sprightly and impish star actress, Alia Bhatt, has been the most talked about heroine of late. Born into the illustrious Bhat family, she proved her mettle in films like Highway, Udta Punjab and Dear Zindagi, a departure from the light romantic roles she essayed earlier. Having won accolades, awards and nominations, the cute dimpled Alia is a brand endorser of many products. The vivacious diva is one of the strong contenders for the top position, with a huge fan following and the cars in her possession exemplify her young, modern and fresh appeal. "Innovation distinguishes between a leader and a follower."

A supreme image comes to one's mind when he lays his eyes on the new, technically advanced, distinguished and unparalleled Audi A6 sedan which is leaps and bounds ahead of its competitors in all aspects and parameters. The 7th generation iteration of this sedan is a radical departure from the previous model which was understated and portrayed a simplistic design language. This one has a charm and aura of its own and truly sets its own benchmarks in terms of technology, comfort, looks and safety thereby redefining the segment norms and modifying the perspective of the brand's discerning customers. When it was launched in India in 2011, it created an immense stir amongst the potential buyers and was an instant hit with the young age corporates who were enthralled by its modern age design language. The wide French beard radiator grille with a silver chrome lining broadens the appeal of the car. Much like its elder siblings, like the A7 Sportback and the flagship A8L sedan, the A6 also gets a dose of the new 'in chic' Audi LED headlights. 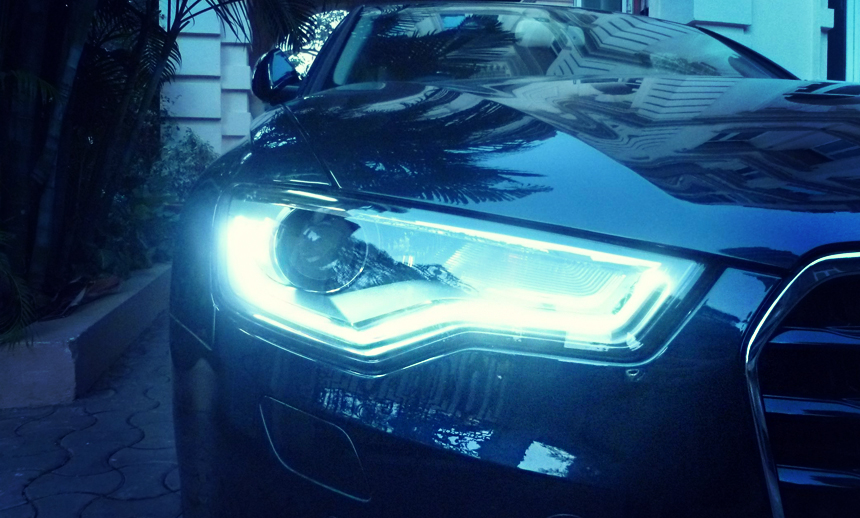 Their operative deed is a treat to watch and is an affirmative proof of Audi's "Advancement through Technology" beyond a shadow of doubt.

So the Germans want you to have a strong penchant for it's over the top ostentatious fragments that do the drawing powers practice exceedingly well. Along the side, the lengthy proportions give it a royal charm and aura together with a strong shoulder line running from the headlamps to the boot behind giving it a masculine touch. The prominent 10 spoke 17 inch cast aluminum wheels look noticeable and complement the new age design philosophy of this sedan perfectly. The rear end is one of the best looking in the segment, courtesy the meticulous and attention to detail LED tail lights underscoring the boot along with a smart black cladding for the bumper that houses the dual oval exhaust pipes.

The clever use of Aluminum components all over has shed the weight by up to 30 Kg and helped boost up power to weight ratio for enhanced performance. The interiors of the A6 greet you with a plethora of latest gadgets and gizmos arranged in the most ergonomic way that significantly add to the X factor quotient and elevate the excitement levels.

The built quality and comfort is simply impeccable and unmatched and takes the crown for pampering the occupants to the fullest. The rising of the MMI touch screen from the dashboard.......was it an out of the box conceptualization?

See it to believe it!

The back seat experience too is a real deal breaker and no compromises have been left in that domain. The model possessed by Alia is a 2.0 TDI variant churning out 177 bhp and 380 Nm of torque mated to Audi's tried and tested multitronic CVT transmission offering seamless and smooth gear shifts.

It offers brisk performance with a 0-100 kmph timing of 9.3 seconds and a top speed near about 220 kmph. Driving the new tech savvy A6 entails a lot for the enthusiasts.

It delivers extremely well on all performance parameters and a short stint with this car can truly send one into raptures of ecstasy.

The 2litre diesel primarily being a front wheel drive mechanism doesn't feature the Quattro system like the A6 3.0 TDI(don't fret about that), but still comes extremely close to its elder sibling with regard to agility and dynamics. A pliant cruiser for city traffic, the A6 shows immense confidence and determination while tackling sharp corners. High speed stability is extremely commendable and the braking is spot on with the car coming to a halt in no time. And...and...and the most "in the limelight" talked about feature of the A6 is the Audi Drive Select that can simply be entitled to a "magnitude of laudations" for its eye opening engaging stint. Being a blue streak kind of a thing in the Dynamic mode to a heavenly kingdom with an unruffled ballpark ride in the comfort setting, you'll indulge in the typical sycophancies for the marvelous Inglostadt exemplar.

Get acquainted with the A6's dexterity to match one's singularity while the Auto is engaged and of course the Individual context enables you to be a choicest of all parameters! The car complements Alia's personality as one feels younger and livelier to be associated with a luxury vehicle that portrays sophistication, class and elegance in a newfangled mannerism. The German Luxury car manufacturer in its relentless pursuit to acquire the pole position in India in terms of sales numbers and customer acceptance launched the Q5 SUV back in 2009.

Having tasted success of the bigger flagship Q7, the company was looking to make strong inroads in the Indian market and acquaint the buyers with every four ringed model product, which in the long run could be a trump card.

So here it is, a faithful three quarter replica of the Q7 ready to go head on with the other German rivals in the segment.

Largely based on the A4 sedan's platform and an architecture derived from the Touareg SUV, the Q5 has a modern design language with a coupe like roofline. The large trapezoidal grille upfront houses the majestic prominent Audi logo. The unique and distinctive identity of this performance SUV are those gorgeous set of LED daytime running lights that provide a reminiscence of a staircase towards glory and triumph (as a felicitous statement).

A very neat and mature design in the making, combining dynamism and athleticism while looking every bit of a baby Q7. The interiors give you that typical familiar feeling compared to other Audi models which is an added feather in the cap.

What say about the choice picker Bang & Olufsen sound system that offers crystal clear sound and lightens your mood after a heavy day at the boardroom and also Audi will willfully keep the grey shades of claustrophobic feeling away from the cabin for an elongated stay....

The pick of the lot 3.0 TDI diesel has a huge fan following and is used extensively among some of the popular models of the Volkswagen family.

With a maximum output of 240 bhp and extensive 500 Nm of torque, this motor has an immense pulling power with a 0-100 kmph timing of 6.5 seconds and a top speed of 225 kmph. The new generation 7 speed dual clutch S tronic gearbox offers seamless precision and shifting. The Q5 makes use of the famed all -wheel drive Quattro mechanism with a 60/40 rear bias that gives it commendable grip levels which in turn acts as a catalyst for its impressive dynamo stints.

The Q5 has truly won hearts of ardent SUV fan followers with its impressive off -road demonstrations in the ever popular 'Audi Q Drive' events that surely makes it class apart compared to its competitors.

The baby SUV from Audi has made a name for itself courtesy the power packed performance, style statement and the fond appreciation of people that Audi enjoys in the country. The above two cars owned by Alia portrays that the actress has a fine liking for something sporty and extravagant while at the same time reaffirming her brand loyalty and patronage.