“Feasting on impeccable ingenuity was a thing of the past for our extra -large affinity towards revered inventions and giving the approach a versatile fashion of the present 21st century will surely make us bask in the glory of possessing XYZ gambits to be on the same affectionate steed.

Not deviating from the customary automotive one track mind phenomena, the charge to zero in on the eminent big gun spot lighter was well within course for another stand out nameable day gig.
Among many!
So where do our fingers point. Its glorious timeline run through of ‘heavy weight’ occasions was an inevitable contender of our bull’s eye picking trials and certainly the gawking concomitant in honors for the attractive able bodied Inglostadt athlete played its part for a stark admiration of the German emotion stimulator, Audi.
There we go! And choosing the latest on the cards, the energetic S5 for a wholehearted encounter would perfectly do the matchmaking for our new- fangled love showering tactics. Ah! We’ve kept the criterias too different this time. Term it as a famed reputation of the revered four rings to inscribe a harmonious matchmaking wavelength to commensurate an indefinite one self’s simpatico in the making.
Oh! The S5’s a charmer. That citation is actually a reflex action when you see the ostentatious bits on the Deutsche work of art steal the senses when it goes one up against the boss man group in your garage.
And you definitely wouldn’t mind relishing the everyday rhapsodic scintilla moments when the ritzy Audi enacts the desirable buddy anchor to propel that something extra in your continued helm of longstanding idolized paroles. Residing high in the ace list of super- duper fascinations, the Audi S5 gets the unfaltering stamp of an authentic co-worker for the polished and urbane trotting much in line with your esteemed demeanor.
Relate it to……….
When you are in the mood to show off the quickie’s culminated apogee.
Ok! But first let’s get to this. 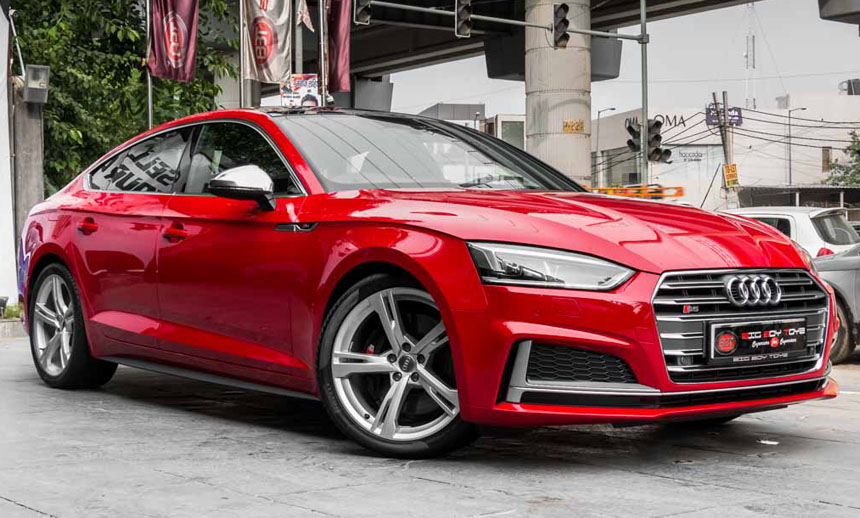 It possesses an overrunning deluge of exemplars to waiver that beetling spooking effect of being a secondary opting……Come on, the Audi won’t let go off that zenith nobility so easily.
The major one being this! No subtle re affirmations needed for the brand enumeration as the attractive badge excels in the ‘smitten take a back’ feelers for a suitable fastening to the neoteric conducts of the latest Axis fad. The S5 isn’t a ‘plain jane’ let go instance kind of a thing on the very first glimpse.
It merits a special treatment to give justice to the sagacious practices of the westerners to churn out the distinctive ‘in chic’ epitome in loads.
Looker of sorts! Of course!
Reserve the momentous gleeful descriptive sayings for its handsome visuals doing the well -bred genre of head turning reruns. And how about grabbing the sensation of Audi’s poised and luscious cabin? Relish the progressive breeding of the Virtual Cockpit which is the proficient chimerical onboard.
Well that’s in the blue chip league for an ebullient laudation with its tech savvy samplings on the inside.

4. Adept at the numbers game? Audi has a new tale to elaborate with an extrovert 3 litre twin scroll turbocharged petrol which marches in the paradigmatic gung ho and fanatical proclivity with its menacing on the go 350PS and 500 Nm of torque mated to the live wire 8 Speed tiptronic gearbox.

No holding back on the potency and eagerness of the zesty performing dreamboat which looks to supersede the shackles with a synopsis of its admirable & crackerjack tarmac maneuvers and dynamics.

Audi’s got hefty reasons to smile as the peppery unit can very well give sleepless nights to the benchmark trendsetters…..as in…all parameters…wow…tick marks done. Sounds good for the German folks!

5. Choicest’s preference at the end of the day? To get hands on the glittery S5, don’t involve yourself in the typical heads or tail attempting.
Let it rule your heart one day and see the Audi after effect thereon.
The machine’s got a tremendous tempting hangover for atop drawer acclamation in all honesty and inexorably the four ringed badge does up the ‘look good and feel good’ factor in totality.