"A thing of beauty is a joy forever" by John Keats!

Words completely fail us when we have to describe the most beautiful woman in the world, a fact that has been seconded by none other than Hollywood's famed actress Julia Roberts. Aishwarya Rai Bachchan needs no introduction. She is totally blessed in true sense and is a god's gift to mankind. Born with good looks and an artistic talent, fame and recognition naturally followed. Our Miss World is beyond a doubt India's pride and neighbor's envy.

And to match her classic pristine beauty, the graceful lady has two flagship four wheel masterpieces from the royal German stables at her disposal.

Indeed true for a car that has lived up to its reputation of unprecedented comfort, luxury and prestige for its discerning buyers across the globe.

The world has been a witness to many generations of the mighty Mercedes Benz S Class with each having a unique charm of its own together with famed history and legacy. The three pointed star is revered and honored with newfangled ideas and concepts and the latest generation of the S Class represents every bit of it and perfectly epitomizes the brand's philosophy of forward thinking and advancement.

A royal home away from home, the S Class is sure to make you fall head over heels in love with its panache, sophistication and the badge value besides satiating one's desire to own a flagship luxury saloon.

The German luxury car manufacturer's latest flagship saloon took the market by storm when it was launched in India and this was indeed a prelude for many successful things to unfold for Mercedes Benz in our country. 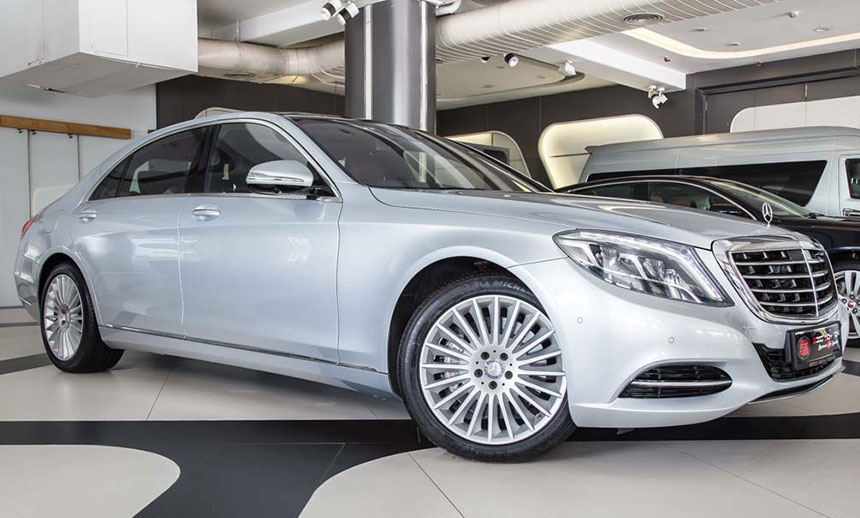 A sheer technological marvel, the new S has surely carved a niche for itself by being a preferred ride option for the elite of the society and it doesn't end here.

Even the Bollywood Superstars would like to get a taste of fine and uncompromised luxury and the beauty queen Aishwarya Rai Bachchan, undoubtedly makes a purposeful statement with the new Mercedes Benz S 500 as her grand possession.

The design language of the new S Class is one to reckon with as it portrays a skillful amalgamation of dynamism, sportiness and elegance in the most discerning way. The wide and brawny face upfront beckons you to admire the large radiator grille that sports four horizontal slats and further complementing the supreme appearance are the gullion akin LED lights(our honest perception).

The three pointed star on the hood accentuates the grandiosity to travel in a vehicle of this class and stature. The side view with the poised and graceful stance has indeed been a hit with ardent brand followers of Mercedes and is truly the way the S Class has been appreciated since generations.

A slight hint of sportiness does catch your eye with the sloping roofline towards the back and much to the good note makes the S boast of an incredible aerodynamic persona with an impressive drag coefficient of 0.24

The strong and vivid shoulder line together with the lower chrome molding further elevates its superb road presence to an all new level. The rear end has a mondaine knowing around it........ and adds many brownie points in the flagship saloon's arsenal along with conferring on it an indomitable supremacy over its arch rivals. The interior of the S Class has exquisitely been tailor made to make you feel special and privileged. First things first, the NVH levels are extremely commendable as one is completely isolated from the outside. The extravagant dashboard incorporates rich quality material together with the ergonomic and meticulous placement of the buttons and switches for easy access and reach. The deal breaker rear bench experience merits one's attention with the well contoured seats deserving a special mention as they engulf you in ultimate comfort and come with the Energizing Massage function that is based on the hot stone principle (warmth is combined with massage to reduce tiredness and fatigue on long journeys) to further the gilt edged kingly feeling. The rear passengers are treated with an individual rear seat entertainment system that comes with two dedicated screens attached to the back of the front seats. Indulge yourself by fondling over the debonair headliners while getting the preferred massage on the move. The overwhelming X factor quotient is the sapient and scholarly acumen behind the marvelous functioning of the Chauffeur Package......for which there would be no end to the repetitive experiencing. One wants a soothing and relaxing environment after a heavy day at the boardroom meeting and surely the S Class offers everything to cater to that as well.

You can choose from the seven personalized ambient lighting colors and five dimming level options to truly transform the cabin's appearance and add to that the crystal clear music experience from the renowned 24 speaker Burmester sound system, the feeling being totally sublime. Did it get you in an elongated adjective framing mode?

And you would definitely like to end the phrasings with hefty exclamations!!!

The breathtaking interiors of the S Class redefine class and opulence with each minute spent inside the cabin being a moment to cherish. A potent 4.7litre V8 engine churning out 455bhp and 700Nm of torque mated to Mercedes' renowned 7G-Tronic transmission takes centre stage with its blistering performance right from the word go.

The S Class does a 0-100kmph run in 4.8 seconds with a top speed of 250kmph and all this is accomplished in a very refined and seamless manner.

The carpet like ride quality offered by this luxo- barge is simply amazing and it can easily give a tough competition to even higher and more expensive luxury cars. Although the international variants of the S Class incorporate a technology called Magic Body Control (sensors make use of a camera system to decipher the road conditions ahead and adjust the suspension setting accordingly to suit the tarmac), this feature is not present in the Indian variant of the S Class due to laws preventing the use of certain frequencies. But despite this the S Class scores high with regard to a plush ride quality experience.

A high speed stint with the S Class will surely leave you impressed with the Active Body Control mechanism that virtually eliminates the body roll while accelerating hard, cutting corners and quick braking.

Another notable feature is the Airmatic suspension that does a commendable job by adjusting the damping of each individual wheel to the current driving and road conditions and alternatively can be configured to Sports and Comfort mode depending upon the preferred driving style. Mercedes truly sets different standards in terms of safety and this being no different with the new S Class too.

A segment defining feature called the Night View Assist Plus comes handy to spot pedestrians and animals in pitch dark conditions through the use of infra red and thermal sensors.

The objects are shown in real time with a red bracket (if they happen to come extremely close to the car) in the multifunction display of the instrument cluster and the car in turn cautions the pedestrians and animals through the use of spotlight which is flashed four times in quick succession. The S Class comes with a new age 360 degree camera view that  enables finger tip like parking in tight spots.

Another out of the box feature is the Attention Assist that is activated between speeds of 60km/hr and 200km/hr and typically monitors one's driving conditions to detect fatigue or loss of concentration together with making effective suggestions for taking a break during the long drive.

The S Class truly takes the crown for being a pioneer in automotive technology and after having gone through the exhaustive list of features we are pretty much convinced why Aishwarya has chosen the swanky Mercedes S 500 as her exotic ride. The four ringed German automotive brand from Inglostadt represents progression, innovation and advancement and strives to be a real trend setter in the luxury car market.

Since the brand's formal entry in India, almost everything has gone well for Audi and what really played a major catalytic role for its immense success was indeed Bollywood's liking for its unique model lineup particularly the colossal Q7. The stepping stone was laid and soon this spread to other models in the entire product portfolio.

The Superstars wanted to have a taste of the exclusive and uncompromised performance and luxury from Audi and what better than the flagship A8L sedan to suit their personalized tastes and preferences.

The leading lady, Aishwarya too is on the list with her top of the line Audi A8L 4.2 TDI. The flagship sedan of Audi, since its launch in India, in an all new avatar has indeed been a trailblazer for many segment first futuristic innovations that lends it an indomitable supremacy over its competitors.

The new- fangled design language looks charming and alluring together with a stately and elegant road presence.

The impressive ostentatious LED lights play a showstopper role and coupled with the enormous radiator grille housing the Audi logo, make for a sophisticated and sporty look upfront.

One gets enamored by the majestic side view which conveys a grand impression due to its gigantic length. The rear end exudes sheer class with its well chiseled styling and architecture and bears a strong resemblance with other Audi sedan models in the product portfolio when viewed from a distance.

The ever inviting and roomy interior of the Audi A8L strikes a perfect chord with the people who want something unique and out of the box. One of the most tech savvy cabins of all time enchants you with meticulous mechanism of various functions being simply amazing and thrilling. The skillful rising of the MMI screen is a delight to see and toggling through it makes you feel on cloud nine.

The well bolstered seats are a cut above the rest with their soft cushioning and high quality leather material.

The rear seat experience with a host of goodies to keep you entertained can ideally be compared to the likes of a business class jet interior setup and this indeed portrays Audi's brand philosophy of Advancement through Technology in the most apt way.

A monstrous 4.2TDI engine developing an astounding 350bhp and 800Nm sounds impressive and courtesy its stupendous performance, re affirms the fact that much fun can be derived from the luxurious A8L sedan despite it being considered as a full- fledged chauffeur driven car. It has got plenty within to keep the speed cravers guessing. The car truly comes out on top with its effortless on road dynamics and corner cutting abilities keeping in mind the sheer weight and lengthy dimensions.

The legendary Adaptive Air Suspension and Audi Drive Select with its four modes (Dynamic, Comfort, Auto and Individual) on offer give a reassuring and satisfactory driving experience that is simply incomparable. The best surely deserve the best. And for Aishwarya, the epitome of beauty, class, style and finesse, the cars above match her demeanor and attitude. And which better place than Big Boy Toyz to come and take a joyride in these flagship cars for the fun loving enthusiasts.