Indian Security Forces and the Luxury Car Brands They Must Own

“I will either come back after raising the Indian Flag in VICTORY or return WRAPPED in it.” –
Indian Armed Forces

Such is the love and respect these men carry in their hearts that nothing comes in their way for protecting their motherland, not even their families or lives. We all know how tensed relations we share with our neighbouring countries such as Pakistan and China and the growing turbulence in Jammu and Kashmir. It is easy to comment on the current unrest in the country sitting at the comfort of our home but have we ever imagined the difficulties these MEN IN UNIFORM actually face while dealing with such critical situations?

Considering the tough challenges they face and the divisions they handle, we have tried to honor them by choosing luxury car brands for them suiting their vigor and aura. Though there are thousands of such divisions falling under the Ministry of Defense and Ministry of Home Affairs, we have selected few ones to start with. With the motto “Service Before Self” , the life of Indian army is of unmatched quality. By this we didn’t mean that it promises a bed of roses or a life full of luxuries but it is extraordinary in every sense. It is very difficult to choose a single luxury car brand defining the machismo of our Army but to a certain extent Mercedes-Benz may be able to justify the characteristics of Indian Army. The G-Class wagen from the German marque is one of the longest products of the brand that came in 1979 and is still present in the market. This heavy duty luxury pickup SUV is ‘built to feel like it’ll last forever’! 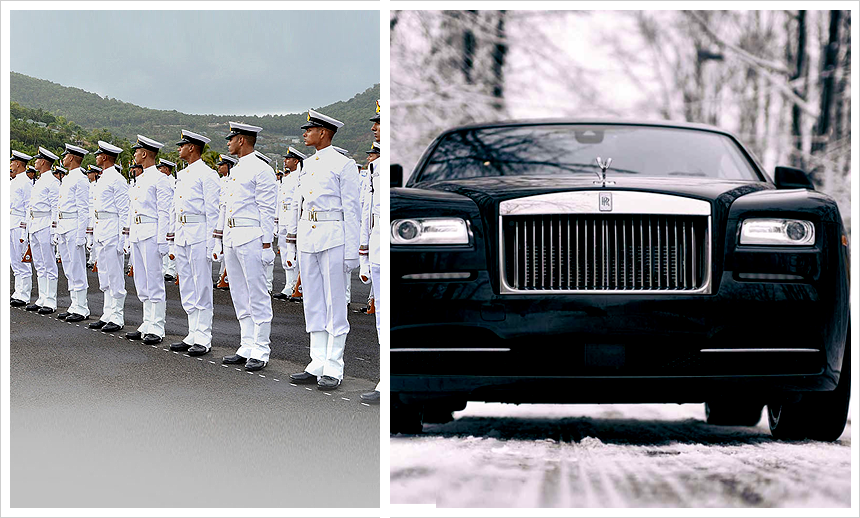 “Sometimes we rush in after the storm,
Sometimes
We are the storm”

Something you would proud to be a part of! The quality and level of life and the comfort given to the Indian Armed Forces can never be seen in the life of us civilians. However, don’t dare to assume that what all they enjoy is comfort and facilities. Surrounded by the water 24*7 throughout the year is not an easy task and adding more to the woe is the separation from family for long periods of time.

Now which car brand would suit the exotic life of Indian Navy? Probably Rolls-Royce! Talking about the relationship between the two, Rolls-Royce and Indian Navy have been sharing the bond of partnership since the inception of the latter for the modernization of the Indian armed forces. And hence, Rolls-Royce seems to be the perfect fit for Indian Navy because it is powerful, elegant and is a brand that one needs to earn not buy. The sky above is not enough to calculate the limits of Indian Air Force as depicted by their motto – Touch the Sky with Glory – and that has also been proved, noted and jotted down in golden words in the history of Indian Armed Forces. Defining its ability, grandioseness and agility, the Italian beauty Lamborghini perfectly matches the qualities signifying IAF . Both are the representatives of the cutting-edge technologies without making any comparison in any aspect and are a perfect blend of lightning and thunder. The recent encounter between IAF’s Sukhoi SU 350MKI and Lamborghini Huracan is perfect to give this selection a thumbs-up! “It isn’t that life ashore is distasteful to me. But life at SEA is better”

Working in close assistance with departments such as Indian Navy and CRPF, the Indian Coast Guard division is full of challenges, engagement and adventure. Each day at sea comes with the task of fulfilling promises where each task is different and carries its own set of experience that is inimitable. For such a hectic profession, only a hard working luxury brand would suit – Aston Martin. The first preference of the James Bond series, Aston Martin carries an unrivalled heritage and each of its babies is dressed in iconic design and represents endless sophistication – just like our MEN in UNIFORM. “We live by chance,
We love by choice, and
We kill by profession”

Generally known as the First Wall of Defense of Indian territories, the BSF is currently the world’s largest force guarding the border. Right from guarding the borders for maintaining peace within the country to keeping any eye and check on the transnational criminal activities across borders, BSF is loaded with huge amount of responsibilities and it need something that stands equivalent to it in terms of robustness, power and deliverability. And what’s better choice than the Jaguar Land Rover that stands out to be the best match for it. The award-winning SUVs by Land Rover carry legacies of their ancestors and are designed to overcome the difficult terrains unaffectedly, just like our BSF. “Mastering others is strength, but
Mastering yourself is power.”

These lines justify the CRPF (Central Reserve Police Force) as well as Ferrari, which is the premium brand we have chosen for this service division. Where CRPF stands for strength and smartness and has the ability to work under extreme pressure and conditions, Ferrari is synonym with agility, victory, power and vigor . Both seems to be complimenting each other in terms of their performance and hence is the perfect match.