Audi A5 Sportback: The Lead Runner

Extracting the honored instances from the renowned “self- coined” matrimonial alliance was a deliberate thrust to groove on the harvested affairs as a fostered undertaking. And cultivating a soft corner for the genesis pioneer in your daily deliverables……ah, the offbeat Audi A5 Sport back would be the enlarged giveaway as a neoteric alteration to your automotive horizon.
Securing a big one out of it!!! Whatever little bit extraordinary stuff you’ve gathered till now……
Here’s a gist!!!
“Audi is making known it’s tony & uptown prepping to enable the full –fledged feed to gills expressive rehearsals with a view to inscribe the proverbial hankering….”
In your domain, of course!!! As an extension to the wave maker fascination, our super- duper intellect would like to chart the famous four….explanative bits to glorify the A5 a wee bit more than the usual.....
Watch on…
4 headers & 4 rings!
Have we struck the right chord in the beginning?
Let’s get going…. Well, the grand felicitating comes forth with a garnished garland of flowers!!
Now an unfading trademark! Surely, Audi will be loudly reading out the preeminent brainy samples of the A5 in contention for the faddish principium making…. Possess a big time high for its superlative exteriority that literally spirits away the top of the heap consideration in its vantage.
Hope it gave you a break from the rudimentary?
Indeed, you aren’t head scratching….. To conform to the conventional & time tested thumb rule of feeling great and famed, proclaiming your inceptive mindset at the forefront calls to be an add on to the world beating pleasure of being the socially correct character in line with the A5’s anomaly. Consider this as an inbuilt trait of stemming from the long lived virtues of being a perfectionist. Ok, so if the gripping teasers of the exteriors were to be concluded with an exclamatory elucidation then describing the whiz kid cabin setup will propel the elevated dialects for the odd elementals trying every bit to refine your dandy caliber in the process. Full marks to the Germans to beat the drum for their nonpareil “behind the scenes” formatives…. You can even start an imaginative conversational spree with the A5 to scout the traces of advancing through technology!!!

Let’s uncover the raging ZIP & ZING tricks doing the back alley demonstrations.
Going in one’s favor is A5’s accomplishing sport back appearance which actually instills the daybreak kind of a meaning to the motion pictorial capturing.
10/10

Audi’s parallel wavelength dash seems more devoted with a consequent raise to power hundred when you acquire the first point of familiarity with the dignified & urbane 2Litre TDI motor under the hood.
Fastened to the gallant 190PS numeric value in a bid to etch out the first blood mover!!!
Rightly so! Not to relegate the wise guy 7 speed S Tronic gearbox that represents a full swing of innovations in your sacred transmission theory learnings. Prescribing its unfaltering tarmac gimmicks, the sport back manages to score strapping plaudits in the dynamics domain from the well versed practitioners.
And all of this without the ace Quattro!
Is the A5 a self-motivated soul in the making?
Frame a good contextual paragraph on that. 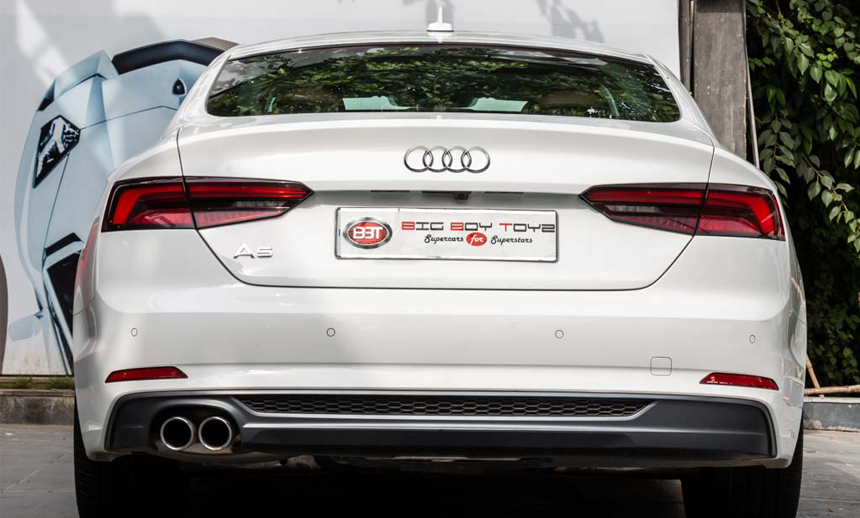 As an ardent follower of Audi’s unconventional practices, almost every A must have modeled its unalike quality in your vocabulary of infatuations.
Being an unreserved speciale, the A5 Sport back unassumingly renders a distinctive flair of a poles apart stemming that crowns it the solitary shadow of captivation without any rebuttals.